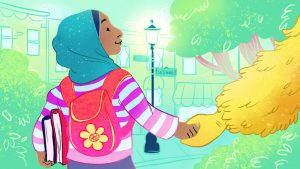 I told you about this collaboration when it was happening, US refugee resettlement contractor, the International Rescue Committee competed for a $100 MILLLION  prize and won by joining with Sesame Street to produce a Middle Eastern version of the show being produced in Jordan.  Characters will of course be speaking Arabic.

Too funny that we have the IRC’s CEO David Miliband crying the blues to CBS’s Leslie Stahl that there isn’t enough money to solve the refugee crisis in the Middle East.

I wondered if somehow Miliband’s huge salary jump from $600,000 in 2017 to over $900,000 now was somehow related to winning this multi-million dollar prize?  Just wondering?

Here is a bit of the story from CBS 60 Minutes:

It’s [Sesame Street] been using television to educate kids in the U.S., including tackling tough subjects like racism and death, for five decades. And it’s done local versions in other countries. In 2016, Sesame Workshop and the IRC had been strategizing about how they could collaborate to help refugee children when a new competition was announced. The prize: a stunning 100 million dollars.

David Miliband: The MacArthur Foundation offered $100 million to any organization who was ready to, quote-unquote “solve a big global problem.”

Lesley Stahl: A global problem that was intractable.

David Miliband: We defined the global problem we wanted to tackle was trauma, toxic stress among refugee children in the Middle East.

In the final pitch to the competition’s judges, Miliband and his Sesame Workshop counterpart Sherrie Westin presented a two-pronged plan: Sesame Workshop would create a new show for the Middle East and the IRC would dramatically expand its services to young refugee kids directly, including where they’re living.

Lesley Stahl: And they gave you $100 million.

David Miliband: Yeah, $100 million is not as much as it sounds. Because it’s–

David Miliband: It’s over (LAUGH) five years. And we’re delivering in-person services to over a million kids and educational content via TV to nearly 8 million kids. So it’s a big enterprise.

The IRC receives nearly a half a billion a year from you, the US taxpayer.

So, I guess the good news is that the money is coming from a filthy rich private foundation and the plan is for it to take care of the refugees where they are—in their own cultural zone.

The story is posted over at ‘Frauds and Crooks.’

As many are, it was a tough call—is it a refugee story or a crime story?  Well, it is both.  So check it out at ‘Frauds and Crooks’ this morning.

Three of these men were flown to America and set up with a new life on your dime.  I think it’s time we cut off the flow of Afghan and Iraqi so-called Special Immigrant Visas.

And, btw, will the feds try to figure out who in the military vouched for three of these creeps? 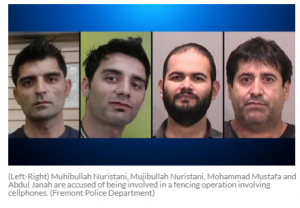