“Where is your courage and bravery to stand against the Marxist mobs!?!?”

Cancel culture only works because every coward goes along with it.

You surely heard that Senators James Lankford of Oklahoma and Ron Johnson of Wisconsin have suggested dumping Columbus Day and replacing it with ‘Juneteenth’ on the federal holiday calendar.

Alan Wall writing at US Inc tells us what happened back home in Oklahoma as that news spread.

Before I get to Wall’s post, know that everything I write in the coming days, weeks, months at both of my blogs will have an underlying theme—you must be prepared, you must fight the mob where you live, and you must slam these pandering Republicans at every level of government.

“So when did you become a liberal? Quit pandering to the mob. Do what you were elected [to do].” 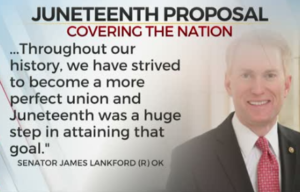 Senator Lankford had joined fellow Senator Ron Johnson of Wisconsin with a proposal to dump Columbus Day as a federal holiday and replace it with “Juneteenth.”

This proposal was quickly publicized, and many Oklahomans contacted the Senator to protest.

But the timing of their proposal made it look like Lankford and Johnson were surrendering to the mobs who are defacing monuments and tearing down statues.

Obviously, Lankford’s voting on immigration measures is getting progressively worse.

Lankford’s votes on immigration issues do not tell the whole story.

Regular readers of RRW know that Senator Lankford, consistently siding with the most radical Leftists in the Senate, has opposed all efforts by the President to reduce the flow of refugees entering the country and opposes Trump’s efforts to reform how the resettlement process works.

Demonstrating that it is not impossible, the good folks of Oklahoma forced Lankford to back down this time!

Mark Steyn has a fantastic piece posted at his subscription-only site addressing the cowardice of Republican elected officials, that would include Senator Lankford, and the so-called smart thinkers on the Right.  He wraps with telling you to fight (in your communities) those destroying the America we love.

November is too late!

So wanker*** Right’s theory that all we gotta do is sit back and let these clowns run amok and their defects will be so obvious, people will come running to us and November will be a landslide. They’ve assured us of that bollocks for decades as they lost the schools and they lost the pop culture, and they lost everything else even now, unto the statue on the village green. Speak up, speak out, to the school board, to your coworkers, to your neighbors, because you can’t have a culture war if one side doesn’t even show up.

***Wanker: Someone excessively and annoyingly pretentious and/or false.