That is the type of headline I’ve seen often in recent days as the Trump Administration works to protect Americans from further spread of the Chinese virus by blocking and immediately returning illegal border crossers.

Editor:  By the way, don’t miss my post on Friday at ‘Frauds and Crooks’ about former refugee Rep. Ilhan Omar’s fraudulent marriage and the decision by the feds not to pursue a case against her.

What these stories, about so-called “unaccompanied children,” won’t tell you is that the vast majority—72% (FY19 numbers)—are “children” ages 15-17 years old.  66% of the those little darlings are teenage males, according to data at the federal Office of Refugee Resettlement.

So don’t get ideas that little frightened five-year-olds are held alone in hotel rooms waiting for big bad Don to send them packing as the legacy media wants you to believe.

Here is a story at CBS News that caught my eye:

Migrant kids to be expelled under virus order not entitled to attorneys and other safeguards, DOJ lawyers say

The Trump administration is arguing that migrant children set to be expelled from the country under an emergency coronavirus order are not entitled to legal safeguards guaranteed to all minors in U.S. immigration custody. 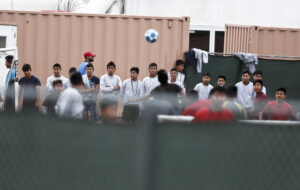 In a court filing on Tuesday, Justice Department lawyers argued that migrant minors processed under a public health order meant to curb the coronavirus’ spread are not in the “legal custody” of the U.S. immigration officials who physically detain them. Instead, the government lawyers said, the children are in the “legal custody” of public health officials they never interact with while on U.S. soil.

Citing that distinction, the Trump administration says these children are not covered under the landmark Flores Settlement Agreement, which guarantees minors access to lawyers, safe and sanitary housing facilities and prompt release from U.S. government detention.

During the pandemic, Department of Homeland Security officials have been relying on a directive issued by the Centers for Disease Control and Prevention to bounce most border-crossers off U.S. soil. More than 109,000 of these expulsions were carried out in July, June, May, April and the last 11 days of March.

Like adults, most migrant children who arrive at the border unaccompanied or with their families have been processed and expelled under the CDC order. Despite a federal law generally requiring their transfer to the Office of Refugee Resettlement, only 162 migrant children were transferred to the agency’s state-licensed shelters in April, May and June — a time period in which more than 3,300 apprehensions of unaccompanied minors were made by officials at the southern border.

The exact number of children who have been expelled under the CDC order is unknown, as the Trump administration has declined to disclose figures. There are fewer than 800 unaccompanied minors in the custody of the Office of Refugee Resettlement, which has the capacity to care for more than 13,000 children at a time.

There is more here.  And, another story at ABC blasting the Trump administration too.

I was most interested in the fact that so few were placed with contractors.  We know that Catholic Charities and Lutheran Immigration and Refugee Service (LIRS) have lucrative contracts to not only resettle refugees, but also to ‘care’ for the kids.

So, of course, I figured those contractors were hurting for payola as the numbers of refugees and unaccompanied alien children were both way down.

I checked USA Spending to see how LIRS is doing under the Trump Administration because four years ago contractors like LIRS were crying the blues about how their mostly federal funding would dry up.

Well, it hasn’t!  LIRS was granted by you, the taxpayer, $71 million in the last twelve months to take care of the children.  72% of that money went to take care of the mostly teenage boys, and for several months there were very few of those allowed to even stay in the country.

They are getting as much or more in funding from the Trump Administration as they got under Obama!  They will be able to get right back to full steam ahead if Biden wins in November!