Should we have expected any other reaction from the nine federal refugee resettlement contractors*** that have been changing America by changing the people for four decades while we pay them to do it!

As I reported here the other day, the President has set the ceiling for FY2021 at the lowest level since the program was launched by Senators Ted Kennedy, Joe Biden and President Jimmy Carter in 1980.

Catholics are up first since the US Conference of Catholic Bishops leads the bunch in terms of numbers of refugees they have placed in hundreds of US towns and cities since the program began.

The big news in this story is that the President hasn’t signed the determination and there is a pause in the program until October 26th.

WASHINGTON (CNS) — The steep slope, appearing almost as a vertical line, is a stunning mark by the Trump administration on what was once a refugee program recognized around the world as a model to welcome the tyrannized and persecuted masses.

Late on the night of Sept. 30 as the annual deadline for setting a figure for refugee admittances approached, the administration announced it would bring the refugee cap—the maximum number of displaced people the country decides to resettle in a federal fiscal year—to a historic low: 15,000.

The average during presidencies of both Republicans and Democrats had been around 95,000. [See how they got this 95,000—ed] But the announcement on the new cap doesn’t mean the bad news for refugees, or organizations that help them, ended there.

“It’s not official, the president still has to sign it,” so no refugees can enter the country until that happens, said Ashley Feasley, the director of policy for Migration and Refugee Services at the U.S. Conference of Catholic Bishops. “I have no idea when he’ll sign it.”

Feasley said there’s a “pause” until Oct. 26, which means nothing will happen until then.

Archbishop José H. Gomez of Los Angeles, U.S.C.C.B. president, and Bishop Mario E. Dorsonville, auxiliary bishop of Washington and chairman of the U.S.C.C.B.’s Committee on Migration, called the low number on admissions, “heartbreaking,” given “the global need and the capacity and wealth of the United States.”

Then we have the International Rescue Committee weighing in….

Nazanin Ash, the vice president of public policy at the International Rescue Committee, also deplored the decision: “The number of refugees worldwide has grown by over 14 million over the last four years, while the Trump Administration has lowered refugee admissions levels by over 80 percent, vastly reduced access to the program for Muslim and Black refugees, severely reduced the number of persecuted religious allowed into the country, and ignored the world’s largest refugee crises.”

She added, “The administration has reneged on U.S. humanitarian obligations, trampled on long-held values, undermined U.S. interests and its own stated policy goals—including by failing to provide safety to thousands in need of refuge because of their assistance to U.S. troops or because of religious or political persecution.”

In response, HIAS President and CEO Mark Hetfield said: “It is a sad moment when our country shows such weakness when it should be leading. The administration’s decision to set a record low number of refugees at a time of record high needs — and without even consulting with Congress, as required by law — shows how far we have fallen. Not only will refugees who have fled violence and persecution suffer, but so will our country, as refugees who become new Americans have contributed so much to this country. 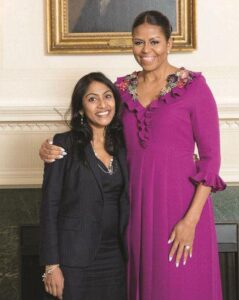 “In just four years, this Administration has cut the refugee resettlement program from 110,000 to a historic low of fifteen thousand. At a time of unprecedented global need, today’s decision to further cut the refugee admissions ceiling is a complete abdication of our humanitarian and moral duty.” said Krish O’Mara Vignarajah, president and CEO of Lutheran Immigration and Refugee Service.

By the way, CWS is the crop walk organization, so if your church is holding a crop walk you are contributing to changing America through migration.

“The Trump Administration’s failure to comply with the Refugee Act and their subsequent delays and cuts to the refugee program are moral failures and a disgrace to the American legacy of welcome.

Refugee resettlement is not a partisan issue. Each day that resettlement is paused is a matter of life and death for the thousands of refugees waiting to rebuild their lives. Congress must not overlook this blatant disregard for human life and our legal process. They must demand that they be consulted as soon as possible and that the refugee program be restored.”

“The proposed refugee resettlement number of 15,000, a more than 80% cut over historic norms, is unacceptable. Our values as a nation and as people of faith demand that we take action when people’s lives are in danger. But for the past three years, President Trump and his administration have strayed so far from these basic principles in the name of their cruel, racist and partisan goals that the life-saving refugee resettlement program is a shadow of what it once was.I urge all Americans to insist that Congress hold the White House accountable to operating the refugee program as required by U.S. law.”

More of CWS’s blast at the President here.

I’ll have more as I am sure this isn’t the last of what we will hear from the contractors.