Think about this dilemma for every Western country with trouble-making Somalis!  The new Somali government doesn’t want them back!

See our post just about two weeks ago—Soul-searching in Scandinavia—about how Norway is getting tougher on the issue of Muslim immigration.

Somalia’s government has refused to receive a number of Somali refugees who were deported back from Europe, an official has confirmed.

Abdullahi Gafow, Director of Immigration and Citizenship, said that six Somali nationals were ‘’illegally’’ deported back from Norway and they were denied an entry.

‘’We won’t receive any refugees who are forced or illegally deported. We have already sent them back’’

‘’ The Norwegian government informed us that they will deport them back by force, but we also told them that we won’t accept,’’ he claimed.

Human rights and advocacy groups have voiced their concerns on deportation of Somalis seeking for asylum, saying that it represents a clear violation of international refugee conventions.

Across Europe, tens of thousands of Somalis are in legal limbo, waiting to have asylum claims processed, or under threat of return to the war-torn nation t if their applications have been rejected.

See our extensive archive on Norway by clicking here.

By the way, we have been told the US is deporting Somalis, but I doubt the Obama Administration has put a single one on a plane. 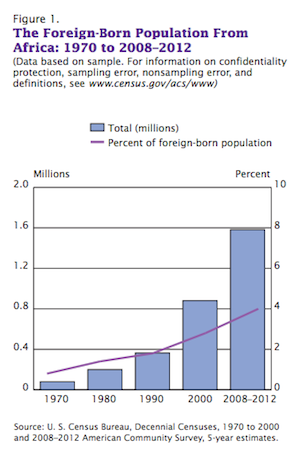 Africa-born people are currently in the news, in a bad way, given the spread of ebola to America in recent days.

As it happens, this week the Census released a 10-page report about Africans in the US: The Foreign-Born Population From Africa: 2008-2012.

It has numerous charts and tables like the map below, showing the location of national groups in the US. We now know about the 10,000 Liberians in north Texas because of the ebola flap, but there are many more of that nationality in Philadelphia.

Go to Limits to Growth to see Walker’s commentary with maps and more charts!

Which African countries are represented in your city?

This post is filed in our extensive ‘where to find information’ category.

Come to think of it, I’m kind of surprised that the Census Bureau is even reporting this information, isn’t it just downright politically incorrect to notice!

Update October 5th:  The Conservative Treehouse has been working on making the connection between the arrival of the hordes of Central America “children” and the nationwide outbreak of Enterovirus68.   I’m not convinced the evidence is conclusive yet, but hope the many excellent blogger/researchers out there continue working on this important question.

I heard a Fox News commentator briefly ask that question more than a week ago, so I’m always on the look-out for some major news outlet even hinting at the possibility.  I haven’t seen it yet. Have you?  However, lots of Americans are asking that question because the timing of the rare virus outbreak surely raises suspicions.  And, if the mainstream media is mum, the alternative media sure isn’t.

We mentioned another report alleging that the “children” did bring the sickness, here, a few weeks ago.

Here is one more story, this time from the Chicago Examiner:

Enterovirus 68, the respiratory infection that has taken the nation by storm, is spreading unlike previous outbreaks of the virus, according to the Centers for Disease Control and Prevention as reported by the New York Times. The latest report on the disease by the CDC claims that nearly 500 cases of the virus’ infection have been confirmed as of this week. Medical experts have said that the real number of Enterovirus 68 cases is most likely much greater because many with symptoms have not been tested.

On Friday, ABC News reported that there are three more cases of Enterovirus 68 at the Children’s Hospital of Philadelphia. Additionally, there have been four deaths very possibly linked to Enterovirus 68. The threat of the infection and its devastation on its victims seem to be growing daily.

Though the White House, the CDC, and the major news outlets aren’t making the obvious connection to the recent reports of immigration and massive acceptance of refugee children along the United States’ southern border, it is logically on the minds of Americans near and far. The refugee crisis that took hold of the nation this past summer caused political riffs between liberal Democrats and conservative Republicans. Politically, Democrats – lead by the likes of Rep. Nancy Pelosi – insisted that accepting the throngs of children into the United States was the right thing to do. Such persons have become more increasingly quiet on the topic as the spread of childhood diseases and more has swept the country.  [These are not “refugees.”  They will attempt to be, but aren’t yet!—ed]

It has been reported that many of these children who entered the United States via the liberally-promoted refugee barrage at the border were allowed to enter the country without any health screening whatsoever – even though it is logical to believe these people could be bringing in diseases from the far corners of the globe. Furthermore, Joe Walsh on WIND-AM talk radio in Chicago insists that public schools have been ordered to accept these children – from throughout the world – without any health screenings being given to the children entering our nation’s schools.

About that map.  Those who claim there is no connection between the throngs of Unaccompanied minors (see the list of states where they have been located) and the troubling virus might point to that map and ask why then has Texas not been hit?

This border surge by the “children” has been coming for a long time!

All of our coverage of ‘Unaccompanied minors’ is here.  The illegal alien children have been coming across our southern border for years, so our archive extends back to 2008.  One of our earliest posts on the “children” was a 2008 story where Catholic Charities in Virginia was accused of obtaining an abortion for a teenaged (unaccompanied) Guatemalan girl in their care, here.

However, for those paying attention, Don Barnett writing at the Center for Immigration Studies warned of the potential for a huge problem with the ‘unaccompanied minors’ here as early as 2004.  It took only the right combination of a wrong-headed law at the disposal of greedy church groups fanning the flames and a President willing to throw open our borders to bring us to this present irreversible crisis.

Update December 9, 2015:  We have much more up-to-date data and the percentage of Syrian Muslims coming into the US this fiscal year is now 99%, here.

Update November 17, 2015:  This post is over a year old. We do know exactly how many Muslims are in the refugee stream arriving from Syria, it is well over 97%, see today’s post, here.

That is a question I get all the time.  My best guess is that a few will be, but the vast majority will be Sunni Muslims.

My guess is based on a few facts from the past, first that of the Iraqi refugees we have resettled in recent years, the majority (we hear 62% this past year) are Muslims, and secondly, I have never seen in print any clamor from our major refugee resettlement contractors***, most of which are ostensibly Christian groups (US Conference of Catholic Bishops, Lutheran Immigration and Refugee service and others), for specifically saving the Christians of the Middle East.

Maybe someone could direct me to anything where these contractors said to the US State Department—we want more Christians to resettle!  My guess as to why they haven’t said that (correct me if I’m wrong and they have) is because of an overwhelming and insane desire to be politically correct and a fear of being called Islamophobes.

(Oh, and believe me, they aren’t taking mostly Muslims because they think they can convert them to Christianity, this is all about multiculturalism, diversity and inclusiveness!)

A writer (Terry Mattingly) at a website called ‘GetReligion’ addressed his question—how are refugees being chosen?—in response to the Washington Post article of this past week (our post here) where the WaPo tells us the State Department is processing 4,000 resettlement applications.

Mattingly found more evidence that most will be Muslims.

He says that since they will come from UN camps (after all the UN is pre-selecting for the US State Department), and the Christians are not in camps, surely the majority will be Muslims.  As a matter of fact, I’ve read that many Christians are still in Syria somewhat protected by the secular Assad government.

First, the WaPo said this:

Most Syrian refugees considered candidates for U.S. residency have been living in refugee camps or elsewhere outside Syria for a year or much longer.

And then this from Terry Mattingly (emphasis is mine):

This leads to a logical question: Who is, when push comes to shove, running these UNHCR camps? In particular, I was curious to know how this selection system would affect the cases of refugees who are part of oppressed religious minority groups. I decided to ask a veteran human-rights activist about that.

The response? Christians on the run have been avoiding these camps because they tend to be hostile to minority-faith refugees. In other words, these camps are run by those in majority forms of Islam, even if they have – logically enough – clashed with the radicalized Islamic State.

In other words, we have a major religion ghost in this story. It is likely that the current pipeline to safety is all but closed to Christians and members of other minority faiths in this ravaged region.

***The US State Department’s nine major contractors (they have hundreds of subcontractors working for them if you don’t recognize these names in your cities):