Turkish President Recep Erdogan may have seen his opening as the world fixates on the spread of the coronavirus and American media can’t shut up about the lackluster Democrats and their campaign to defeat Donald Trump.

So, we follow the shiny objects the media has chosen for us as the next phase (will it be the final phase?) of the war on western civilization is unfolding at the Greek/Turkish border.

There is an excellent piece by Jared Peterson at American Thinker that explains how many European leaders are digging their graves because they don’t get it—Century after century, Islamic supremacist desires never rest. 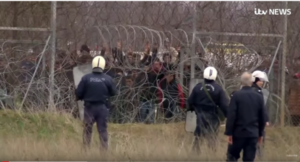 I told you a week ago that it had begun….

As Americans remain riveted to the corona virus and the nauseating vicissitudes of the Democrats’ battle to choose a presidential nominee — a choice now apparently winnowed down to the Marxist or the moron — this writer’s thoughts once again are drawn to events in Europe. The critical situation now unfolding day by day on the Greek-Turkish border may at first seem of minor concern to America, but in fact it’s a critical part of the overall struggle by patriots on both sides of the Atlantic to preserve Western Civilization.

The same forces working here to dissolve American civilization through mass migration and deliberately inculcated cultural self-loathing are busy in Europe pursuing the same goal by identical means. And the same traditional, patriotic segment of the population, guilty of the crime of loving their civilization and wanting to preserve it, resists cultural dissolution in both Europe and America. The commonality of the struggle is striking.

European patriots, however, face worse odds. Their governments are more ruthless in condemning patriotism and love of country (who knew those feelings made one a Nazi?), and Europeans’ history of submission to authority, and consequent ingrained passivity, make them less inclined to risk social condemnation to save themselves.

Last Saturday, the futility of a purchased peace with Islamist governments was once again revealed with striking clarity: Recep Erdogan explicitly cancelled the 2016 agreement and announced that his government would no longer halt or hinder the estimated 3.5 million non-Turkish Muslims already living in Turkey, and the hundreds of thousands more migrants who will now enter Turkey across its eastern border, in their westward movement across Turkey into Europe, via Greece.

Little more than a week after Erdogan’s announcement, scenes of chaos and violence just short of war are unfolding on the Greek-Turkish border. In the ancient Greek province of Thrace, where Turkey’s European-side province is separated from Greece by the River Evros, Greek soldiers and police, behind fences and barbed wire, face off against would-be border crossers numbering, depending on source, anywhere from 13,000 to 30,000, to 75,000. The numbers of would-be invaders and violence increase daily.

German language alternative web sites report that the mobs at the Greek border have not had to engage in all that much “trekking” across Turkey, that unmarked buses headed west — as many 5-6 per hour — depart from migrant camps in eastern Turkey, and that Erdogan’s state railroad assists with transporting the invaders to the Greek/EU/Turkish border.

After the amazing governmental capitulation and public passivity in Germany during 2015, Erdogan is smart enough to perceive that now is his chance to dramatically advance through migration what Kara Mustafa failed to achieve in 1683 through direct military invasion: The gradual but relentless Islamization of Europe.

It is a long article, but take a few minutes to focus on something other than viruses and Democrats and read it !

My complete ‘Invasion of Europe’ archive is here.