I’m posting this opinion piece by the former Democrat Representative from New York merely to continue to give ‘credit’ where credit is due to those who helped create the dysfunctional Refugee Admissions Program that turned forty last Tuesday.

Holtzman came out of the woodwork and used the occasion of the anniversary to pen yet another hit piece on the President with this, posted at CNN:

(CNN) As the global Covid-19 pandemic unfolds, it puts into sharp focus how the Trump administration’s harsh immigration policies may lead to (yet another) humanitarian crisis — this time along the US-Mexico border, where thousands of asylum seekers are living in overcrowded makeshift encampments, many without running water. If there were a coronavirus outbreak in one of these encampments — which are already short on medical supplies — the results could be catastrophic.

Meanwhile, the President is describing Covid-19 as a “Chinese virus” on Twitter and in news conferences, stoking xenophobia and fear — and continuing to undermine the United States’ global leadership.

It wasn’t always this way. Forty years ago this week, when Sen. Ted Kennedy and I co-authored the Refugee Act of 1980, the United States was a different country. It largely welcomed asylum seekers and refugees, and the Refugee Act reflected that humane view. In the act, our country made a permanent commitment to admitting refugees, based on the international non-discriminatory standard of fleeing persecution, and established an asylum procedure inside the United States.

The Refugee Act was not controversial. It sailed through the Senate unanimously and won overwhelming approval in the House before President Jimmy Carter signed it into law on March 17, 1980.

Apparently it was controversial because here we learn that 62% of Americans did not want to welcome hundreds of thousands of refugees to America.

If Carter had a Twitter account at that time, I imagine he would have pointed to the United States’ proud tradition of welcoming the most vulnerable: the 360,000 people who fled Fidel Castro’s takeover in Cuba in the mid 1960s, the tens of thousands of Jewish refugees who fled the Soviet Union beginning in the 1970s, and the more than 400,000 refugees from Vietnam, Cambodia and Laos who arrived here by 1980.

Holtzman then describes how her family came to America as refugees escaping Communism with the help of the Hebrew Immigrant Aid Society (aka HIAS).

I see now how they got their inside track to the federal treasury money spigot.***

From 1980 to January 2017 — for 37 years and under six presidents — the Refugee Act worked well. More than 3 million refugees were admitted and overwhelmingly became productive participants in our country, just as my family did.  [I can play that game too! For every successful refugee I can find you one who is a criminal, terrorist, murderer or just a plain old mooch!—ed]

Yet every year since Trump took office in 2017, he has slashed the number of refugees admitted under the Refugee Act. For this year, it is 18,000, a historic low, reflecting his ongoing battle against admitting new refugees, immigrants and asylum seekers.

The US State Department has said that refugee arrivals will resume on April 6th.  How many of you think the virus crisis will be abating by then.  Show of hands!

*** For fun I went back to the first Annual Report to Congress in 1980 to see which resettlement contractors were operational (being paid by taxpayers to place refugees in your towns and cities) and found this list.

I’ve marked those that are still, 40 years later, receiving millions of your tax dollars. Six of nine have been in on the deal for those 4 decades. No wonder they are furious at the President for breaking their rice bowls.

Go here to the Office of Refugee Resettlement and see all of the Annual Reports to Congress.  They are very informative and you might have a little extra time these days for reading ‘pleasure.’

He will be sending them back to Donald Trump!

How ironic is this. 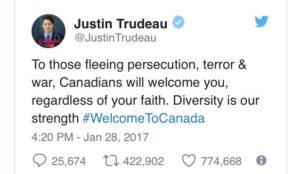 Now here comes the news about the border closures that all sensible countries are putting in place in an effort to slow the momentum of the virus crisis.

It is a long story, probably not worth reading, by a Canadian professor clearly unhappy with the turn of events. The Open Borders Lefties are generally treading lightly because citizens are in no mood to have their liberties restricted (and health threatened) while migrants have free movement around the world.

Coronavirus: Racism and the long-term impacts of emergency measures in Canada

The dangers to public health during the COVID-19 pandemic are terrifying, so it’s not surprising governments around the world are taking extraordinary measures to curb its spread, including closing borders to non-nationals.

Canada has become one of many countries to either partially or completely close their borders and Prime Minister Justin Trudeau has also announced that Canada will no longer consider asylum claims.

Canada has won international praise over the last few years for its commitment to refugee resettlement in particular, as evidenced by the arrival of 25,000 Syrian refugees in a few short months.

But Trudeau has announced that due to these “exceptional times,” a new agreement has been signed with the United States that would see asylum-seekers crossing the border on foot returned to the U.S.

This exceptional reaction goes against Canada’s commitments under the 1951 United Nations Convention Relating to the Status of Refugees and a 1985 Supreme Court ruling that says refugee claimants have a right to a fair hearing (the Singh decision).

I have archived over 200 posts in my Canada category you might wish to have a look at if you have time on your hands!