Are we just bringing in more people every day who will be unemployed for the foreseeable future, sure looks like it.

Supposedly the UN is stopping the flow of refugees worldwide (the UN controls the spigot), but so far we are still ‘welcoming’ more impoverished people to America even in the last few days.

See my latest on the numbers here:

UN Says the Refugee Flow has Stopped, Yet US Admits 182 Since Monday!

Laura Ingraham: Halt All Immigration to U.S. During Coronavirus Crisis

On Wednesday, State Department officials confirmed to Breitbart News that the refugee resettlement program — which has resettled nearly 2,500 refugees in the last six weeks — would be suspended until at least April 7.

Likewise, a State Department official told Reuters that most visa services through the United States Citizenship and Immigration Services (USCIS) agency would be suspended until further notice, though federal immigration officials have yet to clarify which visa programs will continue to bring foreign nationals to the U.S.

Ingraham suggested in a post online that the Trump administration should implement an immigration moratorium while trying to stop the coronavirus outbreak and as millions of Americans are forced to stay home from work. Many of those workers rely on hourly minimum wages and tips.

“All immigration to the US should be halted due to this national emergency — we sure as heck don’t need any foreign workers with millions of Americans on verge of losing their jobs,” Ingraham wrote, along with “#AmericaFirst.”

What the heck!  We have been admitting 400-500 a week recently and so it seems we are right on schedule if 182 arrived in the last three days.

***Update March 20*** Total since Monday is now 214, presume that is it until April 6th when they expect to resume the movement of third worlders to America. We will keep an eye on it!

When I checked the Refugee Processing Center this morning I expected to see the number of new refugee arrivals stalled at 69, not more than doubled!

According to contractual arrangements with the State Department, workers and volunteers for resettlement ‘charities’ must meet the new arrivals at airports and get them settled in their new apartments and sign them up for myriad welfare and healthcare programs available to them.

Guess those do-gooders will be out and about while the rest of us are told to stay home! 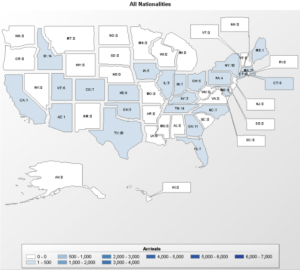