Unless you have escaped to your bunkers, you know that the Senate passed the COVID-19 stimulus funding yesterday.  Here at USA Today:

WASHINGTON – The Senate approved its largest emergency aid package in modern history that will offer $2 trillion to help Americans, hospitals and businesses weather the effects of the coronavirus. The vote late Wednesday night was 96-0.

The bill will now go to the House for approval before it’s sent to President Donald Trump for his signature.

House Majority Leader, Rep. Steny Hoyer, D-Md., announced that the House will vote on the $2 trillion bill Friday, and that they will convene at 9 a.m.

“We expect the bill to pass by voice vote,” he said.

You have been hearing reports, like this one at Breitbart and here at RRW  (refugee contractors lobby for $$$) a couple of days ago that the package includes money for the Migration and Refugee Assistance account that is the pot of money we use either overseas for refugee assistance or to resettle refugees in American towns and cities.

Here is a recent description of MRA from a Leftwing Open Borders advocacy group. They lobby for over $3 Billion annually for the fund.

Now see that the Senate bill includes an additional $350 Million that will end up in the hands of the refugee contractors***, especially those working elsewhere in the world, like HIAS.

The UN has temporarily stopped the placement of refugees, but the US State Department expects to resume resettlement here after April 6. Normalcy by Palm Sunday?  I doubt it. 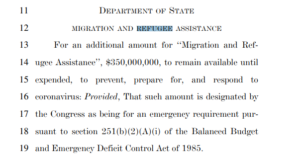 *** For new readers these (below) are the nine federally-funded refugee contractors that operate as a huge conveyor belt monopolizing all refugee placement and choosing which lucky towns and cities will be ‘welcoming’ refugees.