The International Organization for Migration, a wing of the UN, announced refugee travel was being suspended. “This is a temporary measure that will be in place only for as long as it remains essential, ” said the IOM in a statement released yesterday.

I am still not seeing any official announcement from the US State Department and no commentary, so far, from the refugee contractors.  See below that 69 new refugee arrivals were ‘welcomed’ to America since Monday.

Geneva – As countries drastically reduce entry into their territories owing to the COVID-19 global health crisis, and restrictions around international air travel are introduced, travel arrangements for resettling refugees are currently subject to severe disruptions. Some States have also placed a hold on resettlement arrivals given their public health situation, which impacts on their capacity to receive newly resettled refugees.

Refugee families are being directly impacted by these quickly evolving regulations in the course of their travel, with some experiencing extensive delays while others have been stranded or separated from family members.

In addition, UNHCR, the UN Refugee Agency, and IOM, the International Organization for Migration, are concerned that international travel could increase the exposure of refugees to the virus.

As a result, IOM and UNHCR are taking steps to suspend resettlement departures for refugees. This is a temporary measure that will be in place only for as long as it remains essential.

Both agencies look forward to resuming full resettlement travel as soon as prudence and logistics permit.

I decided to check to see if we were still seeing refugee arrivals since I reported, here, that as of a week ago, there was not a slowdown.

Here are the numbers this morning at the Refugee Processing Center from Monday (the 13th) to this morning.

Just to review, in 2013 the Obama Administration told the UN that we we would take 50,000 needy people from the DR Congo over five years.

In fact, since Trump took office we have admitted 32,000 from the DR Congo and distributed them throughout America.

Here is a map from the Refugee Processing Center showing where 69 refugees were placed since Monday.  62 hailed from the DR Congo (including the 13 who went to Idaho and 21 of 22 who were placed in Texas). 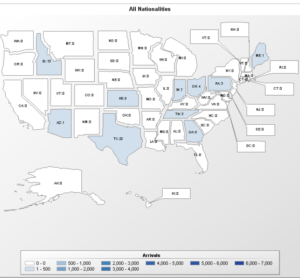 In addition to the 62 from the DR Congo, 3 refugees arrived from Iraq, 2 from Eritrea and one each from India and Somalia.

These numbers do not include the Special Immigrant Visa holders arriving from Afghanistan and Iraq and treated like refugees.  There is no daily breakdown that I know of for their arrival.  Make note that since October 1, 2019 to yesterday we admitted 6,867 special refugees from Afghanistan and 152 from Iraq.  Will check in a few days and see how the number changes.