“If the day of Vice President Haley ever arrives, Trump’s base should have no illusions about the flatlining vital signs of the America First moment.”

I am a one issue person—how we handle immigration is all that matters for the future of the US as we know it.

Nikki Haley may have impressed many of you, but she was soft on refugees when the issue became a hot one in South Carolina a few years ago, and I won’t forgive her for it. 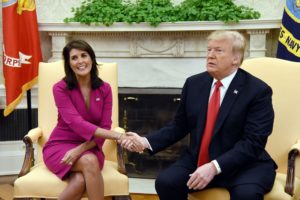 You’ve probably seen the circulating stories about how the President might dump VP Mike Pence in favor of Haley in the coming months.

Frankly, no matter how exciting Haley might appear for some so-called conservatives, I doubt this is even in anyone’s dreams (maybe Bill Kristol’s!) right now.

I don’t know about you, but I think Pence has been a good and steady voice and apparently a competent manager of the Trump coronavirus team and it wouldn’t look good to give him the heave-ho now.

Here is a post at American Greatness by writer Pedro Gonzalez from a couple of days ago about the Haley for Veep thinking (just in case you are one of those hearing a siren song!).

Nikki Haley for Veep? No Way!

Rumor has it President Trump is considering swapping Vice President Mike Pence with former American ambassador to the United Nations Nikki Haley. “This is not a prediction,” said CNN political analyst Paul Begala, “it’s a certainty.” Haley would be a great choice—if Trump intends to utterly abandon the agenda that got him elected.

Pitting Haley against Trump would mean certain political suicide for her, but seeding her in the White House would, in a Machiavellian twist, boost her profile and afford her countless opportunities to subvert the America First agenda. From immigration to foreign policy, Haley has been no friend to MAGA.

Trump would do well to remember his own rebuke of Haley in response to her shot across the bow: “She’s very weak on illegal immigration and she certainly has no trouble asking me for campaign contributions because over the years she’s asked me for a hell of a lot of money in campaign contributions.”

Indeed, Haley is at odds with Stephen Miller on immigration, the last man in the White House who is true to the America First immigration mandate.

When Miller brought together senior officials in 2018 to discuss a plan to reduce the number of refugees admitted to the United States, Haley was deliberately excluded, presumably for her previous opposition to drastic reductions of refugee resettlement numbers. A spokesperson said Miller’s discussion was conducted “in consultation with all appropriate government agencies.” Likely as a result of her views on immigration, then, Haley was kept out of the discussion.

Haley has all the hallmarks of someone who operates with political expediency as a rule. Appeals to emotion, comic displays of faux strength, radically different stances on the same issue depending on the times. But there remains a remarkable consistency and cunning through it all.

She has maneuvered herself into a good light with the president and his supporters, despite remaining ideologically opposed to the America First agenda. Haley has gone from being the GOP’s Obama—the quintessential anti-Trump Republican—to a favorite of Trump supporters and now a potential replacement for Mike Pence. If the day of Vice President Haley ever arrives, Trump’s base should have no illusions about the flatlining vital signs of the America First moment.

Go here to read all of the many reasons, Haley as Vice President would signal the end of this administration’s even nominal efforts to reduce immigration numbers.

Many of us are already worried that once re-elected the President might succumb to those voices within the Republican party clamoring to open our gates wide to a steady supply of third world workers.

And, as I said at the outset, nothing else matters for the future of our great country than how we manage immigration.