….as migrants, refugees and asylum seekers will be blocked from admission because of fear that they are “diseased.”

This line from near the end of an article published in The Nation yesterday sums up the fear of the international Open Borders movement:

The existential threat of Covid-19 has prompted a swift retreat to the nation-state, at the cost of international human rights, as countries rush to fly their own citizens home while keeping others out.

I’ve snipped some highlights from the article, but it is very well worth your time to read it all!

Could Covid-19 Mean the End of Asylum Law in the United States?

As this type of hand-wringing story is wont to do, it begins with a paragraph about the travails of those stalwart souls who walk for months to our southern border expecting to be let in (so they can disappear into their ethnic enclaves and hide for years).  LOL!  No it doesn’t say that last part.

For almost all of the people who made this kind of journey but were unlucky enough to complete it in the past two months, their time in this country has lasted less than a few hours before they were summarily—and illegally—deported back into Mexico.

Since March 21, the Trump administration has sent over 20,000 people back across the border, thousands of whom would have otherwise sought refugee protection. In that same time, only two people were allowed to stay to seek asylum.

One of the earliest victims of the coronavirus pandemic in the United States was the country’s refugee system. On March 20, the Trump administration announced a sweeping and unprecedented order: Instead of processing new arrivals for asylum, the Border Patrol was encouraged to deport them as rapidly as possible. The United Nations said the decision was illegal under international law; advocacy groups and elected officials called the new policy a travesty. The administration defended the move, claiming it was only a temporary, 30-day measure to prevent the spread of the coronavirus. But the rapid expulsion policy remains in place, almost two months later. It has not yet been challenged in court. 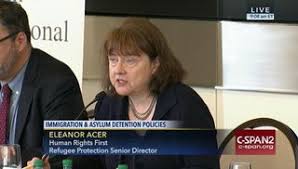 While the administration has justified the end of asylum on the border as a necessary public health measure, it’s not hard to see the ways in which the pandemic is merely the pretext for the order, not the motivation.

“From its earliest days, one of the Trump administration’s chief objectives has been overturning and circumventing US laws that were designed to protect refugees and people seeking protection, as well as unaccompanied children,” says Eleanor Acer, the senior director of refugee protection for Human Rights First. “It’s now using the pandemic as yet another weapon to try to circumvent US asylum law.”

Why, despite its clear illegality, has the total asylum ban remained in place?

Scholars of immigration say the administration has capitalized on two things: the current crisis, and over 100 years of anti-immigrant propaganda casting immigrants as diseased.

Now, here is an interesting piece of news—the ACLU in “disarray!”  Why? Is it because they are busy defending the civil liberties of rioters, looters and thugs?

Organizations that would typically challenge the law, such as the American Civil Liberties Union, are in disarray, as they deal with the shock of multiple emergencies and a pandemic that is impacting their lawyers across the country.

However, even after the intensity of the shutdowns and quarantines wear off, advocates worry that fears of “diseased” outsiders will make Americans—including those who otherwise support the institution of asylum—more willing to give up on refugee law: Foreigners will simply be seen as too dangerous to admit, no matter the circumstances.

“Crisis produces an instinct to close the border and keep people out,” says Charanya Krishnaswarmi, Amnesty International’s advocacy director for the Americas.

But the Covid-19 pandemic might create long-term damage to refugee law in ways other crises have not: Sickness provides a convenient pretext to mask xenophobia. Even in the best of times, immigrants are seen by those seeking to limit immigration as a threat to “our” culture, “our” economic well-being. Now, the risk of a deadly virus means the outsiders can be presented as an existential threat as well.

On April 21, the president announced plans to “temporarily suspend immigration into the United States” in a move Democrats have called “xenophobic scapegoating.” Covid-19 has made tangible the parallels the president himself has drawn between migrants and disease, and given such claims a veneer of legitimacy.

What does this mean for the future of refugee law? Human Rights First’s Acer, like other refugee experts we spoke to, suspects that the new, total asylum ban will last long after the coronavirus pandemic ends. “I expect they will fight to make it last as long as this administration, however long that is,” she says.

However, even if asylum is reinstated on the southern border (for instance, under a hypothetical Democratic administration), Acer worries that the pandemic-inspired exclusions policy might have already done significant damage to international refugee protections.

“What I’m worried about now is how countries like Hungary and Turkey will be emboldened to further refuse refugees,” she says. The language of public health creates a convenient narrative for anti-immigrant zealots like Hungarian President Viktor Orbán to obscure racist and Islamaphobic rhetoric with the language of medical necessity.

There is much more (it was hard to decide which were the best bits to snip!).

It is always worth learning how the opposition thinks and what they fear the most which in this case is that they fear the hardening of borders worldwide while using their humanitarian mumbo-jumbo as a cover for their real goal of erasing borders altogether.

See my Viktor Orban (the world leader I would most like to meet) archive here.