The Washington DC based Niskanen Center is sad to report that between Trump’s policies and the Chinese Virus the refugee numbers for fiscal year 2020 have shrunk to unimaginably low numbers.

I know it seems like an eternity ago when the President set the refugee admission ceiling for fiscal year 2020 at 18,000 the lowest ceiling ever proposed by any President since the Refugee Admissions Program became law in 1980.

The fiscal year ends on September 30th so there is no chance for any serious recovery of the numbers as the virus is not going away and there are only a little over 90 days before the year ends.  We will be watching however as September rolls around and Donald Trump sets the ceiling for FY2021!

Here is the Niskanen Center described at Wikipedia as being “aligned with left-libertarian causes.”  Read about them and see what we are up against (as if extreme fake humanitarian Leftists weren’t enough of a problem).

These types are always trumpeting that the refugee program has gotten wide support on both sides of the aisle, but they never say that most Republicans who back the program do so at the behest of Chambers of Commerce and big companies looking for cheap legal labor!

As of World Refugee Day 2020 [June 20th—ed], the U.S. has resettled 7,684 refugees in fiscal year 2020,which began in October 2019. Since the suspension of the program, the U.S. resettled just 304 emergency cases. To compare, the FY 2019 program resettled nearly 20,000 refugees through mid-June — and that was still historically low given resettlement standards over the decades.

But the low admissions totals can’t just be considered a result of COVID-19 suspensions. President Trump limited resettlement to just 18,000 slots this year — the lowest ever. And as we detailed last year, a variety of changes to U.S. refugee policy would make reaching even the 18,000 mark highly difficult without the pandemic.

I published this mostly for their handy graph below (and because I want you to know about another well-funded swamp creature working against President Trump). 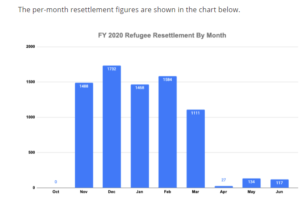 Here is just a bit of what Wikipedia says about the Niskanen Center that spun off from the Cato Institute when the Koch Brothers took control of Cato.

The Niskanen Center is a Washington, D.C.-based think tank that advocates environmentalism, immigration reform, civil liberties, and strengthening social insurance based on market principles. The center is named after William A. Niskanen, an economic adviser to President Ronald Reagan. The Center states that its “main audience is Washington insiders,” and characterizes itself as a moderate think tank.