In a puff-piece story from Idaho about how the state celebrated World Refugee Day, a refugee from the DR Congo trumpets his support for the Black Lives Matter movement.

Every corner we look, they are there,” Wangoi said, referring to “people with racism and hatred in their hearts.”

You know this is insane! Are we importing more angry Africans?

According to the Refugee Processing Center, the US State Department and its contractors have ‘welcomed’ 61,000 refugees  (as of yesterday!) from the DR Congo since President Obama said we were admitting 50,000 over 5 years.

The UN has sent 61,000 as of yesterday and that is only the Africans from the DR Congo.

Here is the story from Idaho that has me steamed this morning!

From the Idaho Press:

This year, the World Refugee Day celebration was held virtually on Saturday, in an effort to protect the Treasure Valley community from the spread of COVID-19. The change was to protect the community and also the refugees who work in health care, on the front lines battling the pandemic’s spread in the valley.

The refugee speakers and performers were asked to submit videos of themselves to celebration organizers, who then compiled them into one presentation.

Georgette Siqueiros, community engagement coordinator for IRC Boise, said the World Refugee Day committee had been planning for how to organize the virtual celebration for several weeks ahead of the event.

Siqueiros said the goal of the event was to celebrate the refugee community and the refugees who are in the health care industry and to acknowledge the importance of the Black Lives Matter movement.

Patrick Wangoi, a refugee from the Democratic Republic of Congo, spoke in the virtual celebration about the importance of the Black Lives Matter movement and his experience with racism in Boise.

“Every corner we look, they are there,” Wangoi said, referring to “people with racism and hatred in their hearts.”

“Their message is, ‘You are not wanted,’” he said. “They wish every black person would disappear.”

Wangoi recalled an incident when he was followed by a group of white teenagers carrying confederate flags in their pickup truck.

He said the group stood outside his house for more than an hour.

“I wonder, if those young boys had a gun, where would I be today?” Wangoi said.

Wangoi ended his video with a call to action for people to be anti-racist.

The video is available on the IRC’s Facebook page.

If you are interested, look around on the internet and you will see that Wangoi is a refugee star in Boise and has done very well for a supposedly discriminated-against black man.

See my previous post on another black man in Idaho. 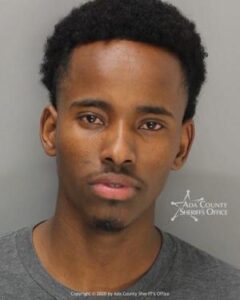