“It is important to hold accountable those who would seek to defraud such programs, particularly when the crimes compromise our national security and public safety, when they impose such high costs on taxpayers…”

Three foreign nationals from Russia, Iraq and Jordan have been charged in stealing information about refugees from the US State Department’s WRAPs data base.

I guess this might explain why the Trump State Department has removed much of the WRAPs data that was available to the public (throwing away the baby with the bath water).

And, this case might explain why the flow of Iraqis to your American towns had slowed dramatically late in the Trump administration.

As we have been saying for over a decade, the US Refugee Admissions Program is filled with fraud and corruption. These three are likely small fish in the overall scheme of things.

From Russia to the Middle East….

WASHINGTON – An indictment charging three defendants was unsealed in the District of Columbia today. 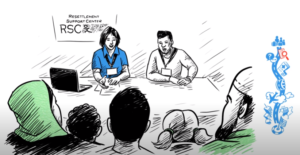 According to the indictment, Sad was employed in Amman, Jordan from 2007 to 2016 by U.S. Citizenship and Immigration Services, and Krasilova held a similar position at the U.S. Embassy in Moscow, Russia. Part of their duties included processing applications for refugee resettlement in the United States through the USRAP.

The indictment charges that, from approximately February 2016 until at least April 2019, the three defendants, led by Abduljabbar, conspired to steal U.S. government records related to hundreds of USRAP applications. The records contained sensitive, non-public information about refugee applicants, their family members, their employment and military history, their accounts of persecution or fear of persecution, the results of security checks, and internal assessments by U.S. officials regarding applications.

As outlined in the indictment, the theft of USRAP records creates a number of risks to public safety and national security while imposing significant costs on the U.S. government, its taxpayers, and otherwise legitimate refugee applicants negatively impacted by the scheme. Defendants Abduljabbar and Sad were previously arrested and remain held without bond. Defendant Krasilova remains at large.

“Individuals like Ms. Krasilova and Mr. Sad are entrusted to protect the integrity of the U.S. immigration system and sensitive information vital to our national security interests,” said Department of Homeland Security Inspector General Dr. Joseph V. Cuffari. “The Office of Inspector General remains committed to aggressively investigating DHS employees who abuse their positions, betray the public trust, and conspire with persons such as Mr. Abduljabbar to defraud the United States.”

We will have more to say, but just wanted to get a preliminary story out.

For those with inquiring minds, here is the indictment itself.  (If this doesn’t open, send me a comment to this post and I’ll send it to you directly.)

We expect the Biden administration to be doing a better job of hiring people for this work than Obama did…  Ha!

And, I just came across this cutesy video created as Obama was leaving office explaining to potential refugees the process for admission to the US.  Thought you might find it interesting.