Even as we have heard nothing but crying and moaning for the last few years from the refugee resettlement contractors*** about that mean President Donald Trump, a report from the UN confirms we still admitted more UN-chosen refugees than any other country!

Here is the news yesterday from the UN High Commissioner for Refugees.

And, btw, the photo the UN uses is of a family of Congolese ‘refugees’ being resettled to France from South Africa, THE RAINBOW NATION, the country that is safe and has been touted as a welcoming beacon to the world, and did I say, SAFE country.

Why are Africans not welcome in socialist, post-apartheid, South Africa! 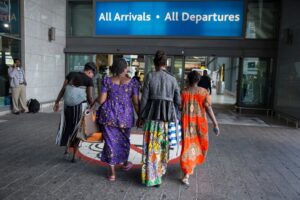 With refugee resettlement at a record low in 2020, UNHCR calls on States to offer places and save lives

Despite an estimated 1.44 million refugees in urgent need of resettlement globally, only 22,770 were resettled through UNHCR, the UN Refugee Agency, last year. This is according to annual statistics released by the agency today.

These are the lowest refugee resettlement numbers the agency has witnessed in almost two decades. The drop stems from low quotas put forward by states, as well as the impact of the COVID-19 pandemic, which delayed departures and programmes.

“We can only hope that 2020 will be an extreme anomaly for refugee resettlement.

We urgently call on governments to boost their programmes this year, offer more places, expedite the processing of cases and help us save lives of those most in need and at greatest risk,” said UNHCR’s Assistant High Commissioner for Protection, Gillian Triggs.

The largest numbers of resettled refugees in 2020 originated from Syria, the Democratic Republic of the Congo, and Myanmar.

So isn’t your next question naturally this one:

So where did those refugees get resettled?

LOL! It isn’t in the story, you have to open the link to the data.

Where is Ms. Trigg’s thank you to Donald Trump?

***For New Readers these are the nine federal refugee contractors who have worked to put Biden and Harris in the White House.

Endnote: See Frauds and Crooks today as Twitter has now basically shut me down.