“Most of the refugees and immigrants that I work with were working in service jobs and restaurant jobs. All of those jobs are going away right now. Everybody’s panicking.”

Almost daily I see stories like this one about how resettled refugees in America are struggling with the Chinese Virus crisis, with joblessness, housing costs, and even with finding enough food.

Yet we have nine federal resettlement contractors*** urging on the Biden administration to keep his promise of raising the refugee admissions ceiling for the year from the 15,000 Trump had designated to the 125,000 Biden campaigned on.

From Deborah Amos, an NPR reporter who doesn’t do much homework! But, like most Leftist reporters thinks a good emotional story is all she has to do to influence the masses.

The loneliest part of coming to America is the first few months, says Mustafa Nuur, who came as a refugee from Somalia in 2014.

Now, the coronavirus makes it so much harder for newcomers, he says. Despite the pandemic, the U.S. admitted 21,533 refugees in 2020, some arriving as late as September, according to refugee resettlement agencies citing official numbers.

“Everybody is getting overwhelmed,” says Nuur, who helps newly arrived refugees get settled in Lancaster, Pa. “Most of the refugees and immigrants that I work with were working in service jobs and restaurant jobs. All of those jobs are going away right now. Everybody’s panicking,” he says.

Federal financial support for refugees ends at 90 days, when they are expected to become self-sufficient. That hasn’t changed during the pandemic. Now, refugees fear eviction and poverty as jobs are scarce. The usual challenges of moving to a new country are all the more daunting when many schools, offices, banks and places of worship are closed and work is drying up.

Work is drying up, so of course we need more low skilled workers.

This comes at a time when many of the nonprofit agencies that resettle refugees are in financial peril, decimated by Trump administration cutbacks, and are hopeful for a reboot under President Biden.

The contractors are in financial peril!  Give me a break!

Academic Bethany Letiecq has been tracking the pandemic’s stresses on refugee families.

“If you are a refugee, coming here with very little, English might be limited, job opportunities can be limited, trying to just meet your family’s basic needs can be a full-time job,” says Letiecq, associate professor of human development and family science at Maryland’s George Mason University.

Many depend on community food banks when paychecks disappear without notice, Letiecq says, and most local rental assistance programs are only short term. “Maybe a month of rental support, but we’ve been in a pandemic for so many months,” she says.

So let’s bring more so they too will suffer (right along with poor and struggling American citizens).

Eviction is a real fear, says Krish O’Mara Vignarajah, the CEO and president of Lutheran Immigration and Refugee Service, one of the nine domestic resettlement agencies that coordinate with the State Department.

“A significant part of the population that we’re serving right now face this as a real threat,” she says.

This is what makes me shake my head!

Look who is doing the boo-hooing!

Vignarajah, (who worked with Michelle Obama in the White House), is a relatively new CEO of the almost entirely federally funded Lutheran Immigration and Refugee Service.

I wonder what the poor struggling refugees would think if they knew that  Vignarajah was likely receiving a salary of over $300,000 annually, most of it coming from taxpaying Americans who are suffering too.

Although, Vignarajah’s salary is not yet available since LIRS is very slow at producing its Federal IRS Form 990’s, her predecessor Linda Hartke who left under a cloud in 2018 that has never been explained, was pulling down a salary of nearly $400,000 when she was given the heave-ho.

Gee, did Amos ever write about that controversy that rocked LIRS for months? Was it, as rumored, a result of shenanigans with federal grant money?

Here is a portion of the most recent salary page at LIRS Form 990:

Now check out page 9 where we can see the amount of government grants LIRS received in that same year.  How much went to helping refugees like Mustafa of Lancaster or was most of it for salary, employment benefits, travel and office space at their digs at the Inner Harbor of Baltimore?

LIRS total income was just over $50 million. Over $42 million is government grant money (aka your money).  Their take from the US Treasury amounts to about 88% of their income (service fees are your money too).

They could not exist without you, the taxpayer, but Amos never reports that! 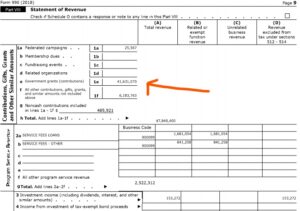 For fun see Vignarajah and her hubby––non-profit power couple.

***For New Readers these are the nine federal refugee contractors who have worked to put Biden and Harris in the White House and are lobbying for millions of illegal aliens to be transformed into legal voting citizens.

Endnote:  Long time readers must think I am a broken record.  But remember new readers come along all the time!  And, for me, year after year, hope springs eternal that one day some ‘mainstream’ media outfit will do real investigative journalism and expose what a scam on America the US Refugee Admissions Program has come to be.