Never mind that we are learning that the refugees already in the United States are suffering during the Chinese virus crisis, losing jobs, being evicted and sometimes not finding enough to eat, the Hebrew Immigrant Aid Society wants more (to suffer?).

Refugees Struggling in America, Yet Biden Promised 125,000 New Refugees in 2021

125,000 would be the largest number admitted in nearly three decades.

The web is exploding with stories about Biden and refugees and I am bringing you this one because I thought a comment by one of the resettlement contractors was informative.

It is about Columbus, Ohio activists jumping for joy that more migrants of all stripes will be staying and that Biden will admit more refugees than that mean old (Americans First!) Trump.

But, see what refugee contractor Angie Plummer says about the 125,000 number.

After years of cuts and crackdowns under President Trump, immigrants rights activists are hopeful that the Biden administration will mean fewer deportations and a larger number of refugees settling in Columbus and the rest of the country.

Former President Trump limited the number of refugees admitted to the U.S. to lows of 15,000 a year. During the campaign, President Joe Biden promised to raise that to 125,000.

“The refugee processing pipeline has been severely damaged, there’s a lot that needs to be rebuilt,” Plummer says.

“So we’re not anticipating that huge number, certainly not this fiscal year.”

By the way, Plummer’s organization in Ohio is a subcontractor of Church World Service one of the nine major federal resettlement contractors.***  HIAS is also one of the nine.

Christian Groups Push for Mass Amnesty and to Raise Refugee Ceiling to 125,000 this Year

So with Plummer’s words in mind, why is HIAS telling its supporters to pressure Chairman Joe to set a ceiling of 125,000 this year?

It makes no sense to bring in more impoverished refugees as Americans suffer with joblessness due to Covid-19.

Previously I thought that HIAS and the others in the open borders movement simply wanted to add more Socialist leaning voters to the voter rolls as a primary objective, but heck they have now figured out how to win without real voters. 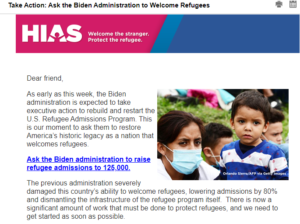 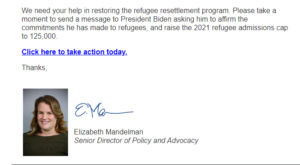 That is a screenshot.  See what they want their followers to do by clicking here.

I have a huuuge archive on HIAS, check it out.

***For New Readers these are the nine federal refugee contractors who have worked to put Biden and Harris in the White House.