Of course Church World Service will give them rosy responses to their request for more information, but at least they can make a more informed decision before changing Winchester forever.

As I said at the time, this is likely happening in many locations around America as the nine federal refugee contractors*** scour the country for new fresh territory in which to place the tidal wave of 125,000 refugees from Asia, Africa and the Middle East that Biden says he is welcoming in Fiscal Year 2022 which begins on October first.

From The Winchester Star:

Councilor Richard Bell, chairman of City Council’s Planning and Economic Development Committee, told the full council on Tuesday night the proposal to allow refugees to live in Winchester needs more vetting at the committee level before a final vote is taken.

“We have requested that it be placed on a future Planning and Economic Development Committee agenda for a more in-depth presentation by the organization and for further consideration,” Bell told the nine-member council.

The organization Bell referred to is Church World Service (CWS), a global nonprofit that hopes to open an office in Winchester to serve people who have been forced from their homelands due to political, social or religious persecution.

Susannah Lepley, Virginia’s director of Immigration and Refugee Resettlement for CWS, told the Planning and Economic Development Committee at its meeting on April 29 the bulk of the refugees, at least initially, would come from Iraq and the Democratic Republic of Congo.

They will be invited to settle in the United States by the U.S. State Department after proving they have a credible fear of persecution, or have already been persecuted, because of their heritage, social status or religious beliefs.

CWS, Lepley said, would find housing in Winchester for the refugees, help them learn English and pursue U.S. citizenship, assist them with applying for public assistance until they find employment, enroll their children in school and so on.

The committee recommended council approve the request, even though member Kim Herbstritt said at the time that Winchester has a severe shortage of affordable housing so it may be difficult to find homes for the 100 or so refugees per year that want to resettle within city limits.

Bell did not say when Lepley would be invited to make a second presentation to the committee, which is next scheduled to meet on May 19. An agenda for that session has not yet been published.

When, and if, Church World Service’s Lepley is invited back, it is vitally important that concerned members of the public, not just those in the city, but county residents as well, be present to hear what she has to say.

First, we must assume, that since the city government is even contemplating saying yes, that Winchester doesn’t have any homeless or needy Americans to care for and that the city is flush with funds for educating children who don’t speak English, has ample affordable housing, is prepared to deal with health issues and is in need of low-skilled workers.

Questions I would ask in no particular order are these:

How long does Church World Service take care of the newcomers they place in the city or county (yes, they can spread refugees out for a hundred miles of Winchester once the office is established)? 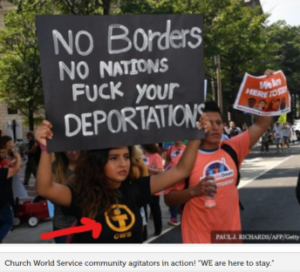 Since CWS supports an open southern border, will CWS also facilitate any movement of illegal aliens/unaccompanied children into the area?

Are the refugees screened in advance for diseases such as TB, HIV, and Covid-19?  Who will pay for medical needs and for how long?

Does CWS have employers lined up?

What religions will be represented in the group of refugees?  And, what other nationalities might be added later?

Who pays for translators when the refugees have a problem with the legal system or educational system? Or, if they have a medical issue?  Local taxpayers?

In what neighborhoods will the refugees be placed?  If Winchester has a minority neighborhood already, care must be taken not to place third worlders into those established areas especially African American neighborhoods. Cultural conflicts have been known to occur. Back in 2008 there was just such a rough period in Roanoke.

If, for instance, Winchester welcomes a hundred this year and another hundred the next year and finds it is straining local resources or causing tensions, can Winchester shut down the flow?

There are probably plenty more, but a beautiful day outside beckons….

The Winchester council, in advance of another meeting with Lepley, must ask if an R & P Abstract has already been prepared for the city by CWS.

These documents, prepared at the level of your local resettlement contractor with the help and guidance of one of the major nine federal contractors, are the blueprints for what is being planned for your town for the upcoming fiscal year.

The R & P Abstracts must be submitted to the US State Department in Washington in advance of placing refugees in any target location.