….so let’s build more bureaucracy to support them!

The headline at Pew Research is this:

Biden Wants to Prepare for Future Surges of Unaccompanied Minors

Okay, that news is bad enough, but it gave me a chuckle to see how they are spinning the present surge of illegal alien kids with the arrival of Biden in the Oval Office—just happens from time to time, move along, nothing to see!

It is just a normal cycle and we must be better prepared by spending more of your tax dollars for housing for the mostly teenaged boys. That apparently is the talking point coming from this White House.

If you missed my post the other day about planes landing in the night in Tennessee, check it out here:

One good thing about the Tennessee expose’ is that the secrecy angle has brought the Administration’s movement of the ‘children’ to the media’s attention, but it has been going on for years.

We see that WRCB-TV in Chattanooga has an update. I’m happy that they are trying to get more accurate information on the Tennessee situation by using data at the federal Office of Refugee Resettlement, but I have a bone to pick with them about their headline.  Here is my complaint:

The Unaccompanied Alien Children are illegal aliens NOT REFUGEES.

I’m sure that the plan all along, when in 2003 the ‘children’ were first assigned to the Office of Refugee Resettlement, was to make the uninformed media, and you, think that they are legitimate refugees when they aren’t!

They aren’t even legitimate asylum seekers unless, and until, they file an asylum claim.

What happens next in the resettlement process of migrant children?

It’s been more than a week since four planes carrying migrant children landed in Chattanooga.

Similar operations are happening across the country. Some of those children are being cared for in a group home, but hundreds of others left the airport on a bus.

Channel 3 learned what happens next in the refugee resettlement process, and the number of children relying on sponsors in Tennessee.

From October to March, 66 unaccompanied children were released to a sponsor in Hamilton County.

While the federal government looks for a sponsor, children are taken to one of about 200 facilities across twenty-two states. A child therapist says this process can take a toll on the children involved.

There are about 200 facilities across the country where unaccompanied children are being housed.

One of them is in Chattanooga, which can house between 30 and 50 minors.

As of May 13, there are around 20,000 kids in the care of the Office of Refugee Resettlement, nationwide. Their average stay is 31 days.

More on that shortly…

But, back to the Pew article I mentioned above.  Get ready for another federal agency for the ‘children.’

The Biden administration wants to create a permanent federal workforce to provide housing for unaccompanied migrant children during surges like the one that began in January and continues to overwhelm authorities.

“We all know that surges arise periodically,” U.S. Department of Homeland Security Secretary Alejandro Mayorkas said during a congressional hearing earlier this month. “They arose in 2019. They arose in 2016, in 2014 and well before that. Migration is a very dynamic and fluid challenge that we have faced for many, many years.”

Mayorkas said during the hearing that DHS is exploring options, but the agency did not respond to a Stateline request for more detail.

Currently, the federal Office of Refugee Resettlement, which is part of the U.S Department of Health and Human Services, houses the children by relying on state-licensed contractors. But Republican governors in Iowa, Nebraska, South Carolina, South Dakota and Wyoming recently blocked contractors in their states from taking in the children, claiming that the unaccompanied kids would displace those already in state foster care or limit states’ ability to make new placements.

However, there currently are no federally funded long-term foster care providers for unaccompanied minors in any of those five states.

The Pew article goes on to say that Senator Rob Portman said the previous administration had no surges, but I am sad to say he is wrong.  They might not have had a surge at the end of Trump’s time in office, but they sure did have a surge earlier as you will see below.

See the data compiled by the Migration Policy Institute.

I know it isn’t what we want to see, but Donald Trump presided over the largest surge year so far. 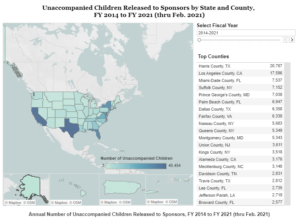 And, so here is my big question:

Since over 70% of the ‘children are ages 15-17, what happens to them when they age-out as they turn 18?   Tens of thousands of Trump’s UACs likely already aged out. Where are they? Why does no one ask? Are they simply loose in your towns and counties?  I think so!

And, see that the Left-leaning Migration Policy Institute is critical of the Biden team’s handling of the mess.  Are they helping set the narrative that an entire new bureaucratic structure is the only answer to the border crisis?

There is another answer—close the border!