This is big and it is buried many column inches into a story at Business Insider entitled:

Biden said the US was committed to accepting more refugees. So where are they?

As longtime readers know, the US Refugee Admissions Program has traditionally paid its nine contractors*** on a per refugee client basis.

So, naturally during the Trump years, when refugee arrivals were low, the contractors were not raking in the federal bucks (your tax dollars) at the rate they did when Obama, for instance, was President.

They whined and complained about having to cut staff and close offices and now they want to get up and running before the promised 125,000 begin arriving in October.

They are getting ready in Idaho! where a controversial resettlement agency there had its budget (waaahh!) halved by Trump.

Although a good bit of the Business Insider article is a rehash of the recent Biden flip, flop, flipping on the refugee ceiling for this fiscal year, the article is nevertheless chockfull of useful information.

For the sake of time, which I am running out of this morning, here are just a few snips:

A spokesperson for the Office of Refugee Resettlement, an arm of the Health and Human Services Department, said the Trump administration’s cuts to refugee admissions had hit the country’s humanitarian infrastructure hard.

“The steady decrease in arrivals during the previous four years has resulted in decreased resettlement capacity at the local level,” they said. Between 2017 and 2021, “approximately one-third of the network had to close.”

That has raised the question: Can the US actually resettle as many refugees as Biden would like?

Officials at US refugee agencies said they would be able to meet the needs of any refugees sent their way. Rebuilding their capacity to do so is a hassle, but it has already begun. New staff are being hired, and new offices will soon be opened — the when and where hinging on support from local communities.  [They are out scouting for fresh territory!—ed]

Okay, here it is for all of you refugee policy wonks!  As I said, this is big!

Wrenn, of the resettlement agency HIAS, said her group would soon be receiving from the State Department “capacity building funds so that we can actually start to hire up and train people for arrivals.”

LOL! “agency partners!” They try so hard to avoid using the word contractors!

For the first time, the government will also be paying its agency partners and their partners on the local level ahead of time and more consistently.

“It has historically always been a per capita system,” she said. Before, “as arrivals fell, staff volume fell, because that’s the way it worked.” Now the plan is to provide a separate budget for the staff — social workers, language and cultural experts, educators — that will not be based, after the fact, on the exact number of refugees that agency ended up serving.

Read on for more information.

And, a shout-out to a refugee policy wonk I know who predicted that this was what they are doing during this time when refugee arrivals are still low.

Can you imagine the competition going on among the nine as they scramble for the Biden bucks no longer tethered to the number of refugees each contractor can manage.

“It is absolutely unacceptable if the Biden Administration is facilitating a mass migration without any input or oversight from Tennesseans and the affected communities.”

***Update*** Governor Lee comments and incredibly a media outlet reminds its audience that Lee had welcomed more refugees when President Trump was trying to get immigration under control a couple of years ago. Is it any wonder that the Biden gang figured Tennessee was a soft target?

For years, readers would contact me to say that planes with “refugees” or migrants of some sort were being flown into small airports in small cities and rural areas.  I would tell them to go film the arrivals because I couldn’t just post something without proof.

Well, finally some citizens are being proactive and doing just that.

The federal Office of Refugee Resettlement (in Health and Human Services) is reportedly behind such flights arriving after dark in Chattanooga, Tennessee.

You may recall that Tennessee Governor Bill Lee was one of twenty governors who earlier this month wrote to Biden to say: NOT in my state!

But, shamefully, he was one of many Republican governors who did not support President Trump when Trump attempted to give governors a greater say in whether their states would receive refugees the federal government had chosen for the state. 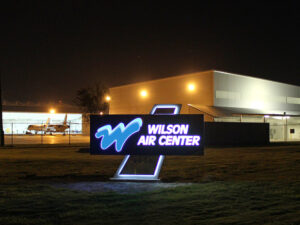 Channel 3 obtained video of one of those planes arriving Friday, May 14 shortly before 1:30 a.m.

A source with direct knowledge of the operation asked to remain anonymous but tells Channel 3 that approximately 30 to 50 minors are transported at a time, some to reunite with family members and others to go to group homes. He says the operation started in Dallas, Texas, but moved to small airports recently to avoid attention.

In April, HHS confirmed a group of unaccompanied minors is being housed at a former Tennessee Temple dormitory in Highland Park. It is not clear how many of the children who have arrived in Chattanooga in recent days have been transported to that facility, but multiple sources say at least ten boys from the group were taken to the facility.

Quotes from US Senators, but what does Governor Lee say?

U.S. Senator Bill Hagerty said he was not aware of the flights into Chattanooga, but said, “It is time for President Biden to be transparent with Tennesseans and the American people regarding where the hundreds of thousands of migrants being resettled in the United States are being sent because they deserve to know.”

U.S. Senator Marsha Blackburn shared a statement Wednesday afternoon, saying she was unaware of the operation in Tennessee.

By the way, for all of you contemplating a move to Tennessee because you might be thinking you can escape to a conservative nirvana, check it out carefully in advance.  They have a lot of problems with refugees there as especially Nashville is a longtime target resettlement site.

Note that I have an entire category titled Nashville which includes over 100 posts on refugees there and in Tennessee generally.