Is your Republican governor one of twenty governors who told Biden not to send Unaccompanied Alien Children (mostly teens) to their states?

If so, tell them to put their money where their mouths are and follow Governor Abbott’s lead.

By the way, Abbott was the only Republican governor in the nation to support President Trump’s efforts to reform the Refugee Admissions Program. Trump’s concept was to give the states and local governments a greater say in the placement of refugees.  Of course, as we have been saying the ‘children’ are not refugees. 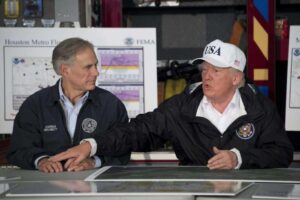 From the Dallas Morning News:

AUSTIN — Escalating his showdown with President Joe Biden, Gov. Greg Abbott on Tuesday ordered state child-care regulators to yank licenses from facilities that house minors who crossed the state’s southern border without papers and were detained.

Currently, 52 state-licensed general residential operations and child placing agencies in Texas have contracts with the federal Office of Refugee Resettlement to care for undocumented immigrant children.

ORR contracts with about 200 facilities in 22 states.

Within three months or so, Abbott’s move apparently would force them to stop serving unaccompanied minors because the facilities must have state licenses to qualify for the federal contracts.

Though it’s unclear how many are kept in unlicensed emergency sites – such as the one that just closed in Dallas or the site at Fort Bliss Army base in El Paso that can hold up to 10,000 unaccompanied migrant children and teens – Abbott’s move potentially could force relocation of up to one-fourth of the children nationwide.

See a post I wrote at ‘Frauds and Crooks’ in April on how the UACs hurt American kids who need foster care.

Today I posted this news at ‘Frauds & Crooks’ but since I have so often written about JBS, and the other big meatpackers pushing for more refugee resettlement because they need the cheap and captive refugee laborers, the post could just as well have been posted here at RRW.

Is JBS Hack a Russian Ransomeware Attack, or Something More?