It is climate change that is driving displacement of populations in Africa and elsewhere.  That is the message coming from the United Nations as the celebrations for World Refugee Day on Sunday were taking place.

From the Family Research Council: 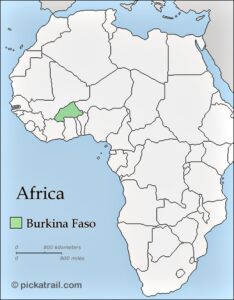 Far from the public eye, jihadist forces have struck with little reaction from the American press. More than 160 civilians were murdered in a terrorist strike on two Burkina Faso villages this month. Another 40 individuals or more were injured in the attacks, which mark the deadliest episode of Islamic jihadism in the country in several years.

Burkina Faso, a sub-Saharan African nation, has been the site of a growing conflict between terrorist groups and government forces that have affected the Sahel since 2015. More than one million Burkinabe have been displaced because of the violence, which has also affected neighboring Mali and Niger, and several thousand have been killed. The insurgency in this part of the world is closely linked to other Islamic terrorism efforts in North Africa, the Middle East, and elsewhere.

Survivors describe the killing as indiscriminate, as the terrorists targeted any individual they could find in the village, including women and children. It has been reported that the attackers burned the local hospital, as well as homes and the village market. No terrorist group has claimed credit for this attack.

Now along comes Angelina Jolie to proclaim (while wearing a head covering) that the biggest threat to the world is Climate Change and “nationalism.”   I am sure the people of Burkina Faso are not thinking much about global warming (or America First nationalists!) as Jihadists roam the countryside indiscriminately killing men, women and children.

Hey world!  Look over here, it is climate change (and right wingers!) that is the enemy, not Islamic supremacists!

Marvel Studios’ Eternals star Angelina Jolie made a fly in-fly out visit to a remote camp in Burkina Faso on Sunday to address refugees who have fled Islamic jihadist violence in the region, warning them the threat of climate change is real and could lead millions to a fate like theirs.

The United Nations High Commissioner for Refugees (UNHCR) Special Envoy, 46, donned a headscarf as she delivered a speech to the troubled West African nation to mark World Refugee Day, confiding she would “bow my head in respect for your courage and strength.”

Speaking in Burkina Faso’s Goudoubo refugee camp, in the central city of Kaya, Jolie added she had “never been as worried” about displaced people as she is now, as the world’s media gathered to record her appearance in words and pictures.

“We have to wake up to the track we are on globally, with so many conflicts raging and the very real possibility that climate change will force tens if not hundreds of millions of people to have to leave their homes in the future, with no possibility of return,” the Those Who Wish Me Dead star warned.

As Breitbart News reported, in 2017 she defended both in a lengthy speech at U.N. offices in Geneva, where the actress and humanitarian warned of a “rising tide of nationalism” in the West “masquerading as patriotism.”

Jolie is also a dedicated campaigner warning the world of the dangers of “climate change” and exhorting nations to change their ways to avert global disaster as she flies around the wrold.

In a nearly 20 minute-long address, Jolie said as an American citizen, she sees a global environment “more troubling and uncertain” than at any time in her lifetime.  [Wow!  Imagine that, worse than any time in her 46 years.—ed]

“We are grappling with a level of conflict and insecurity that seems to exceed our will and capabilities,” Jolie said, “with more refugees than ever before, and new wars erupting on top of existing conflicts, some already lasting decades.”

“We see a rising tide of nationalism, masquerading as patriotism, and the re-emergence of policies encouraging fear and hatred of others,” she added.

The Tomb Raider star said she is keen to help “empower” those who are trying to make a change, while standing with the poor and leading them on to a new life of peace, love and bountiful prosperity in a new world of caring and sharing.

This is a press release from the UN with words from her speech.  I don’t see anything where she points a finger at Jihadists and Islam.  Let me know if you find a full text of her remarks.

See my Climate Refugees category which I have been adding to over the years.

The globalists and their commie pals have been for over a decade setting us up to accept that millions of third worlders will be flooding into the first world due to changes in the weather and you have no say in it.

You WILL pay for the migration as well.