The story from The Blaze: 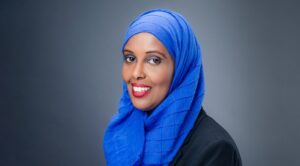 A political candidate in Washington once threatened to blow up a school bus full of children, and when the students attempted to flee the potentially deadly situation she called the kids “white cowards,” according to court documents.

Ubax Gardheere is running for the King County Council in the Seattle area. Gardheere is the director of the Equitable Development Division in Seattle’s Office of Planning and Community Development, which works with organizations on “anti-displacement efforts in high displacement risk neighborhoods, with a continued emphasis on serving BIPOC communities that have been targeted by systemic and institutional racism.”

Gardheere labels herself as a community organizer “focused on policy and systemic healing.” Gardheere, who calls herself a “bureactivist,” says she has “extensive experience in social justice and transformative practices.” 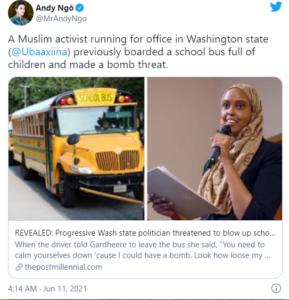 On Jan. 12, 2010, Gardheere allegedly boarded a school bus while it was transporting children to the Chinook Middle School. “Gardheere demanded the driver tell his dispatcher ‘that a national security incident was going on,'” according to a new report from the Post Millennial.

Gardheere, who is a Somali immigrant, began yelling at the children about America’s relationship with Somalia, according to police reports.

The school bus driver instructed Gardheere to exit the vehicle, but she retaliated by saying that she may have a bomb and a gun, the court docs say.

“You need to calm yourselves down ’cause I could have a bomb. Look how loose my clothes are,” Gardheere said, according to an audio recording of the incident described in court documents.

I’ve highlighted that line above because just yesterday at my local women’s shooting club meeting we were instructed on “situational awareness” and told to be more observant about clothing that could hide a weapon (obviously Gardheere was aware of the advantages of her Somali clothes).  In our case yesterday we were instructed that someone wearing an item of winter clothing on a hot summer day might be of concern.

But I digress, back to the story….

Gardheere was hit with felony charges of kidnapping, but worked out a plea deal with prosecutors to get the felonies down to a misdemeanor.

A few weeks after she made veiled threats to bomb a middle school bus with children onboard, Gardheere gave an interview to Seattle Weekly. Gardheere told the paper that she was suffering from postpartum depression after the birth of her son three years earlier.

“She said her mental condition worsened after she stopped in Dubai to see in-laws on her way to visit Somalia in 2008,” the article from January 2010 said. “Then, according to her account, she was nearly raped by someone at the house where she was staying–and beaten up by police when she tried to report the incident.”

She writes-off the school bus terrorism as temporary mental illness.

Her mental illness aside, here is the big question for me!

(See her campaign website where she discusses her refugee status.)

If she was admitted to the US as a starving refugee at age 15, her family would have told the UN and the US State Department that they would be persecuted in Somalia and that they feared for their safety if they were forced to return to their home country.

Then why was she returning to Somalia for a visit in 2008?

Which begs the next question—why was she a refugee admitted to America in the first place if she can just pop back there for a social visit?

This returning to the home country (where a refugee claims they were persecuted) for a “visit” is common practice among Somalis and some other refugee frauds as well.

In my dreams I see deportation for any ‘refugee’ who returns to the country they claimed they were escaping!

Curious about a time-line for Gardheere, here is a brief summary of what I found.  I couldn’t quickly find an article reporting her age, but did find that she was 29 when she terrorized the school children in 2010, and she admits she was 15 when she was resettled as a refugee.

That makes her around 40 years old today.

She describes herself as a single mother with three children and I wondered where might hubby be now. She did have in-laws in Dubai in 2008, or so she says.

(Wondering about Somalis in Dubai, I learned that there are many prosperous Somalis doing business between Dubai and Mogadishu, so was Gardheere a legitimate refugee?)

We assume she was resettled in the Seattle area because unfortunately for Americans there, the area was a prime resettlement site for Somalis.  Not as huge as Minneapolis, but up in the top 5 or so for sure.

I went back to one of the most-read posts of my nearly 14 years writing this blog, and see that she was likely ‘welcomed’ to America in 1996 during Bill Clinton’s term in office.

It is a shame that I stopped updating that post in 2016, because as I reported previously, the data is now not available to the public except possibly in Annual Reports to Congress  and available there only up to 2018.