That is likely because the administration is too busy admitting illegal aliens by the hundreds of thousands.

Don’t get me wrong, I am not upset by potentially the lowest resettlement year in the history of the four-decades-old program, but it is puzzling that he and Kamala went through the charade of setting a legal refugee admissions ceiling of 62,500 to be admitted by September 30th when they struggled in May to admit 916 refugees (271 were admitted in April).

If that rate continues Biden beats Trump to the lowest annual admissions since 1980.

Trump admitted 11,814 in his last full fiscal year in the White House

By the way, at a quick glance down the admissions list, it looks like the Africans from the DR Congo still lead in the resettlement sweeps.

In 2013 Obama promised the United Nations we would take 50,000 from the DR Congo, a number we have far surpassed now (the extensive data we could mine for such information is now gone).

However, as of last July we were up to 74,000 from the DR Congo and they are still coming!

Texas is the top ‘welcoming’ state and it has been for years! 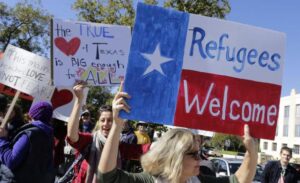 Here are the top ten states so far in FY21:

Getting ready for October!

Right now, the big nine refugee resettlement contractors (below) are out scouring America for new resettlement sites so that when October first comes around they will be ready to move 125,000 impoverished people (Harris/Biden have promised) from the Middle East, Africa and Asia into Anytown, USA where they can gain a foothold and open an office.

You need to be alert for any sign that the contractors and their hundred or so subcontractors are preparing their paperwork for your town or city (it is called an R & P Abstract) to open an office where you live.  This is the time of the year they get those documents ready to submit to the US State Department so they can get their allotment of paying “clients” (aka refugees) for the new fiscal year.

And, incidentally, once refugee offices are open, I’ve noticed that illegal aliens tend to congregate in those towns and cities as well.

Your job is to make political noise if they have targeted your town!  The only hope I see is if enough political turmoil is created, they may move on to a town/county/city they can pushover more easily.

Hold them off for a year or so and then work like hell to get the Dems out of the White House.

Here are the nine Foreigners First! organizations that are changing America by changing the people.

(LOL! For my faithful readers you probably wonder why I keep showing this list.  I was told once that people need to see something seven times before they remember it.  Well I figure seven times seven is better than a measly seven!)