US News has done a handy analysis you can read yourself.

Nearly 100,000 Afghans have been resettled in the US in two decades.

Here is a screenshot of the summary of where most of them went: 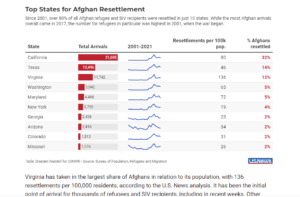 Interesting to see that Governors Kristi Noem (SD) and Mark Gordon (WY) have said no thanks.  However, they may soon learn they have no say in the matter.

Know that Wyoming is the only state in the nation that has never set up a refugee program.

Go here to see the states where governors have remained silent on accepting Afghans.

It is really a moot point however, since it has been established that states cannot say no.  Trump attempted to give them that power, but almost all Republican governors rejected his plan.