Most illegal African migrants travel by sea to get to Europe, but due to a blip in the political boundary of Spain, they have a way in by land.   And, of course to get this far, Morocco must have let them through their other borders!

Update February 28th:  New York Times is reporting the story too with photos.  Not just Africans, but Syrians in the mix.

MADRID – Some 500 African migrants stormed a triple barbed-wire border fence Monday that divides the Spanish territory of Melilla from Morocco, with about 100 making it over, an official said.

The migrants targeted two different sections of the border and were “very violent” as they used “sticks and threw rocks at Spanish and Moroccan police”, said a spokeswoman for the Spanish government’s representative in Melilla.

About 100 of the roughly 500 migrants involved in the border assault managed to enter Melilla, she added.

The Moroccan interior ministry said at least 27 people had been wounded, including 13 members of its security forces hit by rocks that the migrants hurled at them as they stormed the border fence.

Moroccan police arrested around 100 migrants, including 14 who were taken to hospital in the nearby town of Nador suffering injuries caused by the barbed wire that the Spanish authorities have placed on top of the barrier as a deterrent.

It was the latest in a series of coordinated assaults by African migrants on the border of Melilla, which along with fellow Spanish territory Ceuta has the European Union’s only land borders with Africa.

Some who make it over the fence are allowed to stay in Spain!

The spike in the arrival of migrants to Melilla in recent weeks has caused the population of an internment centre in the Spanish outpost to swell.

The centre, which has room for 480 people, currently houses more than 1,000 migrants. Military tents have been set up at the centre to accomodate the overflow.

Depending on treaties between Spain and the country of origin of each immigrant, some are repatriated and others are allowed into Spain.

I’ve seen several stories cross my desk in the last few days like this one from North Dakota—Lutheran Social Services trying to dispel “rumors” that local/state taxpayers are on the hook for refugees placed in their towns and cities.

The Lutherans are trying to get their hooks into Wyoming.  Could that be the motivation for this campaign!

Here is the story from WDAY.TV that makes me laugh!

Fargo, N.D. (WDAY TV) -It’s a number that may surprise you. Every year, 400 some refugees make their way to North Dakota.

I love it how they leave the impression that these Africans/Middle Easterners/Asians etc.  just “make their way” to a place like North Dakota—they are in North Dakota because Lutheran Social Services has a lucrative contract with the US State Department (federal taxpayers!) to bring them there and drop them off!

Tonight, Lutheran Social Services held a forum at Fargo Public Library to educate people on refugee integration into the community.

Event organizers say they wanted to dispel the rumors that local tax payers are footing the bill for new Americans.

Of course, some of the cost of refugees rests with local taxpayers!  Who else is paying for the education of the refugee kids but local taxpayers, not to mention the costs to local health clinics and the demand put on local subsidized housing that would normally be available to American low-income citizens.

And, let’s not forget the cost to local police and county court systems when refugees break the law.  Here is just one case—Somali mass murder in North Dakota—that you know cost local taxpayers a bundle and presumably will cost North Dakota a bundle for his incarceration.

Readers might want to visit this breakdown of the costs of refugees in Georgia showing the federal and state share of the cost (prepared by Refugee Resettlement Relief).  North Dakotans should be asking their state legislature for a similar accounting.

Instead, they say, Social Services offers a federally funded program to help refugees.

Yes, sure!  And, the federal funds grow on trees in Washington.  What about federal taxpayers (are North Dakotans not federal tax payers?).  From our fact sheet (here):

The federal programs available to them include:

Then do they think that citizens are this stupid?  Refugees live on $335 a month for 8 months!

Kavidhe Gundale, Lutheran Social Services: “They get only 335 dollars per month, for 8 months. They have to pay the rent, they have to pay for the gas and everything. “

Every year 300 refugees will call Fargo, 90 in Grand Forks and 10 in Bismarck.

While we are on the subject of who is paying for all this, have a look at the most recent Form 990 for Lutheran Social Services of North Dakota, here.

In the most recent year available, they had total revenue of $12 million (rounded number) and $8.4 million (70%) came from you via federal grants and contracts.

Here is how most of that was spent (rounded numbers):

$465,000 for current directors and officers compensation

They would not exist without taxpayer dollars!

I was looking for something else, and I’ll post it when I find it, but the Migration Policy Institute, last fall, published this useful information on MENA immigrants in America.  Who knew that there was even a separate category for them.

Before you read on, just a reminder that the Migration Policy Institute is a pro-open-borders Leftie-funded (Soros et al) ‘think tank,’ (we wrote a lengthy post on them here in 2011), however, since the Left needs this data too (LOL! for voter outreach), I doubt they would mess with stats like these.

MPI says the top 5 states for MENAs are:  California, New York, Michigan, Texas and New Jersey.  It looks like Virginia and Florida are not far behind! 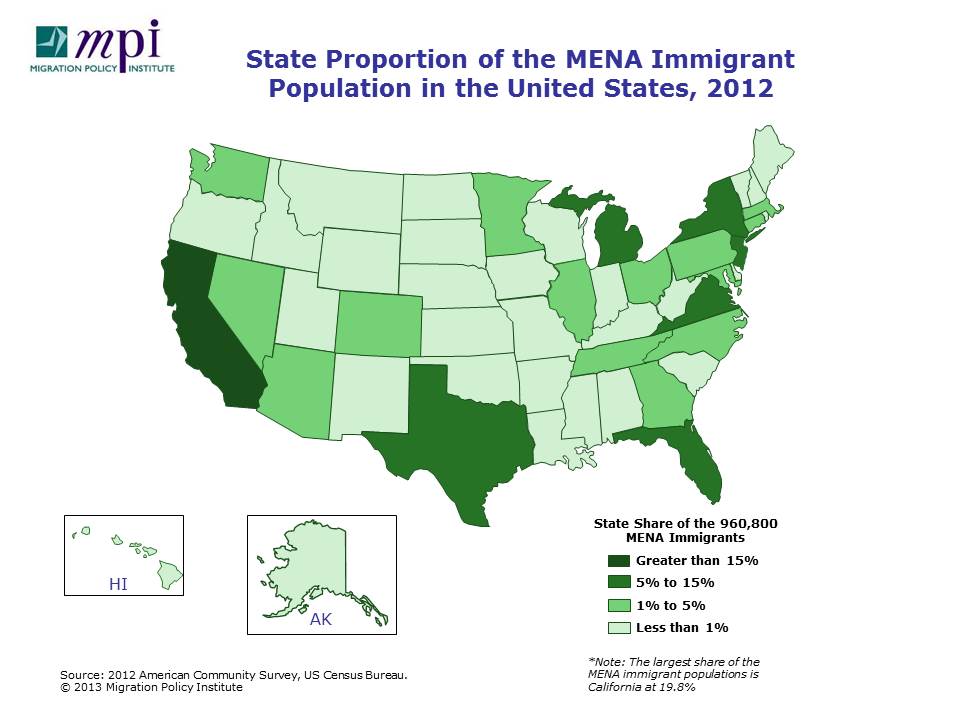 Political unrest and violent conflict have displaced millions in Syria and other parts of the Middle East and North Africa (MENA) since late 2010, generating significant international interest in immigrants and refugees from the region.

Iraqis are the largest single-country immigrant population from this region, followed closely by Egyptians. The number of immigrants from Saudi Arabia and Yemen has also grown rapidly over the past decade.

Compared to other immigrant groups, the foreign born from the MENA region are better educated and tend to have higher levels of English proficiency, but have comparatively lower rates of labor force participation.  [So, are they living off the US taxpayer?—ed]

There are lots of links to follow for more information, here are just two bullet points I followed.  If you have a feeling the speed of their arrival has increased, the answer is Yes!

Consider that we resettled 19,491 Iraqis in the US in 2013, here, and are on target to admit a similar number this year, it sure looks like the US taxpayer is going to be supporting a large percentage of them.  And, by the way, who the heck are all those (rich?) Saudis getting into the US, and through what legal program?

We have a category here at RRW entitled, ‘where to find information’, and this post will be archived there.

They allegedly reaped hundreds of thousands of dollars through food stamp fraud, selling drugs and trafficking in stolen property, then sent money to Pakistan.

Readers, since the availability of the facebook page Diversity’s Dark Side, run-of-the-mill immigrant food stamp frauds will be posted there, but this one had a couple of juicy bits that add to our extensive archive on food stamp fraud here at RRW.

EVERETT — A police raid on a downtown mini-mart Tuesday morning was the culmination of a 17-month investigation into food-stamp fraud.

Fraz A. “Tony” Mushtaq, 34, the owner of the A One Smoke & Grocery store at Everett and Colby avenues, is suspected of paying people cents on the dollar for access to their state food-benefits cards.

He also is under investigation for allegedly buying and selling merchandise shoplifted from area stores, money laundering and selling an illegal form of synthetic marijuana known as “spice,” police say.

Everett police believe a significant amount of the store’s inventory has been ill-gotten, said Lt. Jim Duffy, who leads the special investigations unit.

The police department has received complaints about the store for several years, he said.

Police believe the amount of stolen merchandise moved through the store, including pop, energy drinks and cigarettes, could total in the millions of dollars. Careful financial investigation has documented hundreds of thousands of dollars in questionable transactions, Duffy (Lt. Jim Duffy) said.

The police have been investigating this case since 2012.  So, did he already have US citizenship or get it after the investigation had begun?

Mushtaq is from Pakistan and became a U.S. citizen a couple of years ago, Duffy said. Investigators believe he was sending money from his store back home to Pakistan.

And, this next bit is ludicrous!  Everett investigators claim the money was not used for any “improper activities” in Pakistan!  We are expected to believe these local investigators (or anyone else!) were able to follow the money in Pakistan!  Not to mention the fact that tax dollars from food stamp fraud going to a foreign country constitutes an “improper” activity all by itself!

They found no evidence the money was being used there for any improper activities, Duffy said.

For new readers:  Immigrant-perpetrated food stamp fraud became a side interest here at RRW in 2008, click here for our extensive archive.