And, one of the authors of this Op-Ed works with the resettlement contractor, Refugee Assistance and Immigration Service, which is Catholic Social Services.

What the ‘professors’ don’t get is that you can’t shove diversity, especially in the high numbers now arriving through refugee resettlement, down the throats of people anywhere. Imagine if we westerners wanted to go live in Somalia or Saudi Arabia and be given a guiding hand with social services and job training, etc.  Heck, they wouldn’t just write graffiti on our cars—they would kill us!

Here is how the piece at Alaska Dispatch News begins:

After about an hour-long interview, we asked our final question: “What makes you feel welcome here, in Anchorage?” The interviewee, a Somali refugee who has lived in Anchorage for less than five years, said: “The people. The people are very welcoming and friendly.”

These words from one of our research participants came to mind this weekend as we read about Mohammed Hano and Mobarak Albadawi, Darfuri refugees whose cars were vandalized with messages like “go home,” “leave Alaska,” and “you’re not welcome here.” These words again came to mind when we read that the Anchorage Police Department (APD) refused to send an officer to investigate the “vandalism incident.” And the words came to mind once more as we read piercingly negative comments to the Alaska Dispatch News’ coverage of the crime, such as, “I would love to know how much they (the refugees) are profiting from all the donations …,” and, “They come from a land of genocidal maniacs … but they are frightened by some paint from vandals … this is a simple minded hoax …,” and, “this is an incredibly minor crime … there’s zero evidence of a hate crime.”

The lecture is here if you want to hear more.

The Leftist community organizers and co-authors (Robinson and David) go on to say that the refugees don’t get much welfare (they get generous welfare for years! See ORR annual report, here), that this is probably a hate crime and that the community should be offering “love, acceptance and support” to the myriad ethnic groups being resettled in Alaska.

For psychology professors they sure are dumb about the psychology of the average conservative hard-working American man or woman who see their tax dollars going to help third world migrants settle in Alaska while we have American poor people (and probably many Alaskan natives!) living in poverty.

How about taking care of our own first?  What is wrong with that?  Not cool enough for these two?

Here is a little experiment:  Let’s just say a whole host of conservative (Robinson and David might call them ‘rednecks’ in private) Americans moved up to Alaska and into the community where they live, would Robinson and David welcome their diversity? Is diversity so beautiful then?  My guess is that they would eventually move out!  But, maybe the average Alaskan who wants to maintain his or her community and culture (the one they know and love) can’t so easily move.

Is ‘social justice’ only for Left wingers and immigrants?

Be sure to see a post we wrote on Alaska, here, about the refugee flow to Alaska (thanks to the Catholics!) making it possible for the construction of a large mosque in Anchorage.

See also our post on St. Cloud community organizer and scold—Professor Luke Tripp—here.  See a pattern?  You might also want to see our post—more than half of the Somalis in Minnesota live in poverty.

Will this be coming one day to a city near you?

We just told you about the rise of the European right in our previous post, and now we see the right fighting back in Australia as well.

A special tax on that gruesome Islamic halal slaughter was the ostensible focus of the rally by anti-Sharia activists, but so-called anti-racism demonstrators (hard Leftists) turned it into a melee in which some demonstrators were hurt.

Amazingly, proceeds from the fees that companies must pay to label their foods halal would go to Islamic organizations. 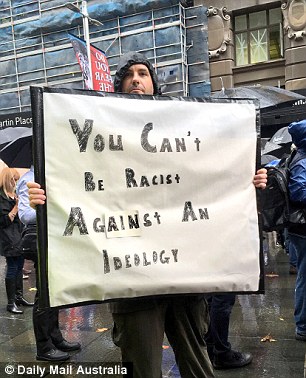 Anti-Islam protests in Australia against Sharia law and halal tax turned violent after demonstrators clashed with anti-racism activists who burned the country’s flag.

Police were forced to separate the Reclaim Australia supporters and opponents of the group in Melbourne, after clashes turned ugly and several people had to be treated by paramedics.

The protests came as companies seeking to label their foods halal – must pay fees to Islamic organisations for inspection and certification.

Recent figures show the halal sector could be worth $1.5 trillion worldwide by 2050.

Across the country, 16 rallies were scheduled to take place, with events in Sydney and Melbourne appearing to have drawn the biggest crowds.

There was a strong police presence throughout the protest, which included riot police. Two people were taken away by officers after they rushed the stage and attempted to disrupt the rally. One took the microphone and told the crowd they should be ‘ashamed’.

In Melbourne, protesters clashed with anti-racism activists in Federation Square. Two people were arrested after they attempted to break through a police barricade that separated the different groups.

There is more, here, with lots of photos.

Just as we do with our ‘Invasion of Europe’ series, we post on Australia so you know that one day, as the Muslim population grows, this could be happening where you live!  Our Australia archive is here where the present government is attempting to stem the tide of Muslim migration, but possibly it is too late with the population already too high and the stealth jihad well underway.

This story is from the New York Times yesterday and is built around the news that Bulgaria has completed a significant border fence with Turkey in time for the spring flood of Syrians, other Middle Easterners and Africans trying to get to the more ‘welcoming’ and potentially lucrative, for them, western European countries like Germany and the UK.

Bulgarian security people believe the jihadists are in the flow.

From the New York Times (emphasis is mine):

Lesovo, Bulgaria — Less than two decades after the painstaking removal of a massive border fence designed to keep people in, Bulgarian authorities are just as painstakingly building a new fence along the rugged Turkish border, this time to keep people out.

Faced with a surge of refugees from the Middle East and North Africa — and the risk that they include jihadis intent on terrorist attacks — Europe is bolstering its defenses on many fronts, including this formerly Communist country, which little more than a quarter-century ago was more concerned with stanching the outbound flow of its own citizens to freedom. For the past 16 months, Bulgaria has been carrying out a plan that would sound familiar to anyone along the United States-Mexico frontier: more border officers, new surveillance equipment and the first 20-mile section of its border fence, which was finished in September.

The hardening of the Bulgaria-Turkey border is one very visible manifestation of the agitation across the continent about the economic, social and political ramifications of the surge in immigration. With warmer weather fast approaching and more refugees likely to be on the move, nations along Europe’s southern tier are beefing up border staffing, adding sensors and other technical barriers, expanding refugee facilities, and building walls.

More than 200,000 refugees are known to have penetrated Europe’s land and sea borders last year, not including those who were able to sneak through undetected.

And the numbers for the first two months of this year, when Europe enjoyed its second mild winter in a row, were up sharply compared with the same period last year.

Anti-immigrant sentiment is increasing in Britain, France, Hungary, the Czech Republic and elsewhere across the continent. Parties espousing ethnic nationalism are seeing their support rise, some to the point where they threaten the dominance of more traditional parties.

“The rise of the right wing in Europe is a reaction to this refugee flow,” said Boris B. Cheshirkov, chief spokesman in Bulgaria for the United Nations High Commissioner for Refugees.

Slavcho Velkov, a Bulgarian security expert and university lecturer, said he believed there was more jihadist movement through Bulgaria than the authorities acknowledged.

“I have seen such fighters here with my own eyes,” he said. “I spotted some at the central bus station and struck up a conversation. When I asked them where they were going, they said, ‘We are going to heaven.’ ”

There is a lot more. Continue reading here.

We keep you informed on the ramifications of the ‘Invasion of Europe’ because the US is headed down the same path, just a few years behind Europe.