Unlike their Central American counterparts, these Africans are very well organized!

As you read this remember that LEGITIMATE asylum seekers are required to file for asylum (for refugee status) in the first safe country they get to (after supposedly escaping their home country where they supposedly were persecuted).

What these migrants and so many other wannabe ‘refugees’ around the world are doing is called Asylum Shopping!

ASSEMBLY OF AFRICAN MIGRANTS IN TAPACHULA DEMANDS ASYLUM IN U.S.

Among the multitude of migrants waiting in Mexico to get asylum in the United States are thousands of Africans boldly demanding passage into the country. They are far more coordinated than their Central American caravan counterparts and have formed an official organization to spread their message and advocate on their behalf. The group accuses Mexican authorities of discrimination and racism and is ordering Mexico to grant visas that allow them to continue their trek north to seek “protection” in America. 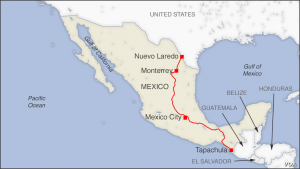 For about three months the Africans have been holed up in Tapachula, in the southeast Mexican state of Chiapas bordering Guatemala.They traveled for two months and crossed eight countries to reach Mexico, they assert in a mission statement that outlines their suffering as well as their demands. “We have climbed mountains and valleys,” the document reads. “We have crossed rivers with strong current. We have slept in the middle of the mud. We have gone hungry and drank rainwater to survive. We have seen bodies of migrant brothers on the road, dead of exhaustion, or drowned in the rivers. The jungle is populated by wild animals, snakes and poisonous insects. In that territory there are also criminals who assault people, who rape girls and women, killing those who try to resist. Many of us have lost all our belongings, including our official documents. We have gone through extremely dangerous cities and towns. We had to hide. We have suffered extortion and threats by authorities in Panama, Nicaragua, Honduras, Guatemala and Mexico.”

They describe themselves as the Assembly of African Migrants in Tapachula, a group of 3,000 men, women (many pregnant), boys and girls from various African nations, including Angola, Burkina Faso, Cameroon, Eritrea, Ethiopia, Ghana, Guinea Conakry, Liberia, Mali, Mauritania, Congo, Senegal, Sierra Leone and Togo.They claim they left Africa because they suffered “political persecution” due to their religious beliefs and “sociocultural identities.” They also write in the statement that their homeland is “impoverished and subdued from the Western powers” though they aspire to obtain asylum in a nation considered to be a Western power.

Here is their manifesto. Begs the question again: Who is paying for all of this and doing their political organizing?

If this bunch is permitted to move toward our border, there will never be an end to the Africa to Mexico migration!