You might have seen the news about yet another church torched in France, but maybe you didn’t see the follow-up.

Rwandan refugee, 39, faces up to 10 years in prison after admitting arson attack on Nantes cathedral

A Rwandan refugee could face up to 10 years in prison after admitting setting fire to Nantes cathedral. 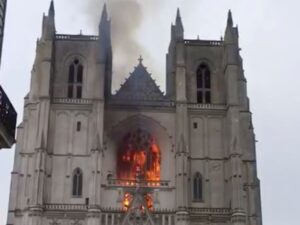 The 39-year-old man, who has solely been identified by his first name Emmanuel, worked as a volunteer security guard at the 15th-century Cathedral of Saint Peter and Saint Paint which set alight last week.

Three fires had been started at the site on July 18 and it took 104 firefighters to control the blaze which tore through the building and caused millions of pounds worth of damage.

The Rwandan refugee was questioned for a second time yesterday by prosecutors and he was placed under formal investigation early this morning after confessing to setting fire to the cathedral, French newspaper Le Monde reported.

Emmanuel was being housed by the Nantes diocese, having arrived in France five years ago, and was one of seven security guards at the cathedral.

On the day of the fire he was responsible for locking up the cathedral, which was started in 1434 and took more than four centuries to complete.

Hours later, fire and thick black smoke could be seen pouring out of the building, causing millions of pounds worth of damage.

The main organ, which dated back to 1621, was completely destroyed, along with priceless stained glass.

He served at the altar,’ said Father Champenois, before Emmanuel was charged. ‘He was well liked. He was a Rwandan refugee who took steps to obtain papers in France.’

Michel Bourcier, the cathedral organist, said: ‘We have been saying hello and good evening for several years. He is extremely courteous.’

It is presumed that “Emmanuel” is a Christian, but you never know since when advancing their cause, Muslims are permitted to lie.

And, don’t forget!  Just because a refugee is (or says he is!) a Christian it doesn’t automatically mean he/she is a good person!

Reader Paul sent this yesterday ( a post from last year) about the coming race war in Europe.  It’s a good read and it might be worth buying the book.

This post is filed in my ‘Invasion of Europe’ archive.