Holy cow!  This story at the New York Times yesterday was revealing and that was because, first and foremost, it says to me that there is discord, and there are leakers willing to leak about that discord, inside the Biden/Harris administration!

The entire issue of refugee resettlement had gone into sleep-mode in recent months, so I’m surprised that the topic is now front and center, not so much because of refugee numbers per se, but because it is giving us a window into an extremely dysfunctional (back stabbing) administration.

Don’t get me wrong.  I am happy with the foot-dragging and flip-flopping, and I am happy to see so many Open borders pushers with their undies in a wad, but it is disquieting to see such an erratic decision-making process.

Not to mention, if Biden’s rationale is that he doesn’t want to piss-off more voters (or members of Congress) on immigration issues before the mid-term elections, that ship has sailed.

Everyone already knows he has unleashed the invasion.

We are being overrun by illegal aliens and the average American isn’t sitting out there saying, well, we can cut him some slack because at least he isn’t bringing in tens of thousands of legal refugees from across the entire globe.

See my post yesterday about how the border and the refugee admissions program have long ago been “conflated” in peoples’ minds.

Here is a bit of what the New York Times is saying in what is likely the first, hopefully not the last, reporting on the bloom-off-the-rose for Biden.  It is long, and likely only the wonkiest of refugee wonks will read it all.

Forgive me for my fixation on this, but I have never seen anything quite like this mess in all the years I’ve been writing about the US Refugee Program, and I especially love to see the Lefties at each others’ throats!

An Early Promise Broken: Inside Biden’s Reversal on Refugees

What had been an easy promise on the campaign trail — to reverse what Democrats called President Donald J. Trump’s “racist” limits on accepting refugees — has become a test of what is truly important to President Biden.

(If Biden brings in fewer refugees than Trump did in a year, will they call Biden a “racist?”  Just wondering!)

WASHINGTON — Secretary of State Antony J. Blinken was in the Oval Office, pleading with President Biden.

In the meeting, on March 3, Mr. Blinken implored the president to end Trump-era restrictions on immigration and to allow tens of thousands of desperate refugees fleeing war, poverty and natural disasters into the United States, according to several people familiar with the exchange.

But Mr. Biden, already under intense political pressure because of the surge of migrant children at the border with Mexico, was unmoved. The attitude of the president during the meeting, according to one person to whom the conversation was later described, was, essentially: Why are you bothering me with this?

What had been an easy promise on the campaign trail — to reverse what Democrats called President Donald J. Trump’s “racist” limits on accepting refugees — has become a test of what is truly important to the new occupant of the White House, according to an account of his decision making from more than a dozen Biden administration officials, refugee resettlement officials and others.

Mr. Biden was eager for the praise that would come from vastly increasing Mr. Trump’s record-low limit, people familiar with his thinking said, and he decided to increase the cap even earlier than the usual start of the fiscal year, Oct. 1.

But only weeks into Mr. Biden’s presidency, immigration and the border had already become major distractions from his efforts to defeat the coronavirus pandemic and to persuade Congress to invest trillions of dollars into the economy — issues championed by aides like Ron Klain, the White House chief of staff, as more central to his presidency.

The exchange on March 3 took place shortly after Mr. Biden had dispatched Mr. Blinken and two other cabinet secretaries to formally tell Congress that he would increase refugee admissions during the next six months to 62,500 people from the annual 15,000-person limit set by Mr. Trump.

Instead, the president undercut his emissaries and left hundreds of refugees in limbo for weeks.

For the next month and a half, Mr. Biden’s aides stalled, repeatedly telling reporters and refugee advocacy groups that the president still intended to follow through.

On Feb. 12, the president delivered on the specific commitment to Congress, pledging to resettle 62,500 refugees fleeing war and persecution at home. Mr. Blinken delivered the message to lawmakers along with Alejandro N. Mayorkas, the homeland security secretary, and Norris Cochran, the acting health secretary at the time.

“They went there and presented a really thoughtful plan, and we were so thrilled,” said Mark J. Hetfield, the chief executive of Hebrew Immigrant Aid Society, a resettlement agency.

“And then,” Mr. Hetfield said, “it just evaporated overnight.”

As the weeks stretched into months, it became clear that Mr. Biden’s presidency would not be the panacea some had thought.

The biggest knife-cut of all!  Biden wanted to stick with Stephen Miller‘s cap!

Instead of making good on his promise to significantly expand refugee entry into the United States, Mr. Biden was sticking to the cap engineered by Stephen Miller, the architect of Mr. Trump’s immigration policies. 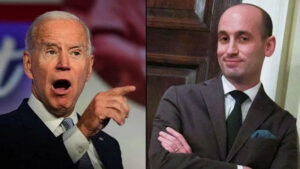 “This reflects Team Biden’s awareness that the border flood will cause record midterm losses,” Mr. Miller tweeted, adding that if it were still up to him, “Refugee cap should be reduced to ZERO.”

The idea that Mr. Miller and Mr. Biden were in agreement about anything was anathema to most of the president’s supporters, many of whom flew into a rage.

By Friday evening, the White House was in full damage-control mode.

Jon Finer, the deputy national security adviser, held an emergency conference call with refugee advocates at 7:30 p.m., emphasizing that the administration would work to welcome in the refugees with haste.

That is enough to show you what a hash the administration has made of the refugee admissions program and immigration in general!

Is Biden a closet racist?

I’ve wondered for over a decade why Biden’s Delaware never welcomed refugees in any numbers.

Only a handful have ever been placed there and no one seems to know why.  It isn’t because it is a small state, because Rhode Island is smaller and has welcomed thousands more than Biden’s home state.

According to the US State Department data base at the Refugee Processing Center, Delaware has only ‘welcomed’ 171 refugees since the beginning of fiscal year 2003. (Data before 2003 is not easy to access.)

Well it is a small state you say!

It is twice the size of Rhode Island which took in 3,122 poor third worlders in the same time period.