“Barack Obama’s immigration legacy was not, in fact, anything to celebrate,” says Slate

In a little-noticed announcement, the former vice president committed to a more ambitious refugee policy than existed under Obama.

After a laundry list of all of the evil doin’s of President Trump (with Stephen Miller’s help), Slate reporter Dahlia Lithwick goes on to say: 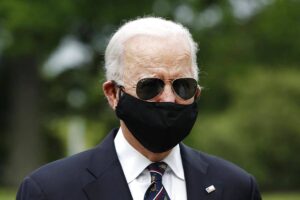 Undoing this damage will be a heavy lift for whoever next occupies the Oval Office, but there is some cause for optimism.

Last Sunday, on World Refugee Day, Joe Biden laid out how he would reverse Trump’s assault by committing to several essential immigration actions: Having pledged that if he is elected he will restore “America’s historic role as leader in resettlement and defending the rights of refugees everywhere,” Biden had set specific targets that will increase refugee resettlement in the United States.

His plan would aim to admit 125,000 refugees to the U.S. (that’s up from a ceiling of 18,000 under Trump, and more than Obama admitted). In his announcement last week, he added a new pledge: to work with Congress to establish a minimum admissions number of at least 95,000 refugees annually.

In addition to those actions, Biden has promised to:

pursue policies that increase opportunities for faith and local communities to sponsor refugee resettlement. I will make more channels, such as higher education visas, available to those seeking safety. I will repeal the Muslim ban—and other discriminatory bans based on ethnicity and nationality—and restore asylum laws, including ending the horrific practice of separating families at our border. I will work with our allies and partners to stand against China’s assault on Hong Kong’s freedoms and mass detention and repression of Uighurs and other ethnic minorities and support a pathway for those persecuted to find safe haven in the United States and other nations.

This is how we always get beat by the Left.  They are proactively working to change the Refugee Act of 1980 to make it harder for any president in the future to reduce the number of refugees to be admitted.

Where is our side in Congress?  There is no one that I know of working to pull the debate in the direction of greater restrictions and protections for towns and cities who might be inundated with more impoverished people.

The proposal mirrors the plan set forth in the Refugee Protection Act of 2019, now pending a vote in the House of Representatives. It signals that Biden isn’t just running against Trump’s anti-Muslim, anti-refugee, anti-immigrant dog whistles, but is also committing energy and, more importantly, resources to fulfilling the United States’ reputation as a nation that welcomes those in need of shelter, and also to making the U.S. government a central player in solving a global refugee crisis that has only grown more exigent as a result of COVID-19. It signals that Biden understands that solving the refugee crisis is both a hefty administrative lift and a moral and democratic imperative.

Also notable is that Biden isn’t seeking to simply return to Obama-era policies, but is going further, faster, in a tacit statement that Barack Obama’s immigration legacy was not, in fact, anything to celebrate.

Should Biden win the White House in 2020, he will face an administrative state that has been hollowed out from within. The government agencies tasked with refugee resettlement will need to be rebuilt to do the work of meeting the 125,000 refugee admission target, and as we learned in the Obama era, even with a Democrat in the White House, refugees have been a constituency with little power or pull.

But the commitment to work with Congress to create a new floor on refugee admissions is the truly radical aspect of Biden’s new pledge. It would mean that whoever takes office in future could not do what Trump and Stephen Miller did and set a future ceiling at 18,000 or even lower, because there would be legislation in place to preclude it.

If nothing else, these past four years have revealed what kind of statutory protections refugees will require to prevent another Trump-like presidency from closing America’s doors again.

So for all of you asking me ‘what do we do?’  You need to work to re-elect Donald Trump as I said in November of 2019.  If Biden wins there will be nothing more for me to do. I don’t plan to chronicle into my dotage the cultural and economic death of our country.