Today I had a question from a reader who asked me this:

Can you point me in the direction to find out how to track what is going on in my own and adjacent states?

It is almost like asking me, as I am beginning my 15th year of writing about refugees, tell me all about the US refugee program!   And, I might ask how many hours do you have?

My reader’s question is not unreasonable and it is one I would have asked 15 years ago.  I don’t mean to sound dismissive, but where could I begin?

So, here is my recommendation to any of you reading this post who are fairly new to the refugee controversy and the network of government actors and non-profits that call the shots, please use my search window.  It is really very good! 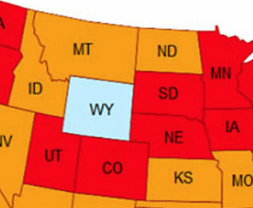 Since my reader lives in Wyoming, let me say first she is lucky because Wyoming is the only state in the nation with no refugee admissions program (so far!).  There was an attempt a few years back, and I wouldn’t be surprised if there isn’t one again, to open the state up to the ‘joys’ of third world diversity.

I covered that controversy extensively as it unfolded.

The first step would be to simply search RRW for each state (typing state name in search window) and be prepared for a very large number of posts to appear for each one—after all there are 9,667 posts at RRW!

If you are reading my posts on your phone, please open RRW on your computer and see the search window in the upper right.

You may wonder why some photos/images are missing for older posts and that is because I was deplatformed and had to scramble to save my material.  Some images were lost in the process.

After you have read as much as you can handle about each state—all of the states surrounding Wyoming have seen their share of controversies—then you should have an idea about which of the nine contractors*** have subcontractors in those states.

Find out where they are located and call them on the phone to find out more about what they are doing.

And, don’t be stupid by being confrontational!  You want to get information right?  Then the best thing to do is play dumb!  Seriously!  Sound interested in their work!

Likewise you have a state refugee coordinator.  I previously had a whole list of those, but can’t put my finger on it now. However, you can search the internet for refugee agencies in your state.  You should call the coordinator too and ask for information (after you have read enough of my posts to get a feel for the program).

And, one more thing of a thousand things I could write!  Check out a series I wrote a while back entitled ‘Knowledge is Power‘ for an overview of the program.

Take the time to learn about the US Refugee Admissions Program (believe me, it isn’t going away anytime soon!) before jumping into action because it will do you no good to launch an activism initiative until you have some basic understanding of how it works.

The Open Borders agitators and the refugee contractors (with media backing) know their stuff and will quickly neutralize you if you don’t have your facts.

And one last thing…

Right now the contractors are on a hunt for new resettlement sites and to expand existing ones as I reported here about Winchester, VA.  If you hear that your town might be a target, get in touch with your local elected officials and see what you can find out.

***These are the nine major refugee resettlement contractors, there are at least a hundred subcontractors working under them: