Over the last few years we have covered the story about Uzbek’s getting into the US as “refugees” thanks to a secretive ‘airlift’ by the US State Department and possibly the CIA (Was the CIA involved behind the scenes in Uzbekistan?) during the Bush Administration and in the wake of the Andijan Uprising in 2005.

Here is what I said in a post in 2011.  This is based on my assessment from reading many accounts of what happened, but as far as I know NO REAL INVESTIGATIVE REPORTER WITH A MAINSTREAM MEDIA NEWS OUTLET HAS EVER TRIED TO GO DEEPER.  It is time someone did, as some of the Uzbek “refugees” are turning up as criminals and terrorists (see all of our Uzbek posts, here).  This is me in 2011:

At some point I need to look more closely at the case of the Uzbek refugee airlift to the US in the wake of the Andijan uprising.  In a thumbnail, Uzbekistan’s President is a secular Muslim (if there is such a thing) and a group of fundamentalist Muslims were working on an uprising, so supposedly government soldiers, at President Islam Karimov’s direction, opened-fire on a demonstration and killed many (the 2005 Andijan massacre).  The survivors went to nearby countries to escape and thus became “refugees.”

Please remember this is a very simplified version of events.  So, they were designated refugees but wished to stay in Europe (they were initially taken to camps there and wanted to stay near their families still in Uzbekistan).  The US State Department, in its infinite wisdom, said, NO, we are taking you to American towns and cities and dropping you off whether you like it or not!  So, we actually expedited the process and flew an unknown number to your neighborhoods.

Now here is the latest “Uzbek refugee” crime story which, what a surprise, involves food stamp fraud!   Hat tip: ‘pungentpeppers.’   Note too that the men arrested in Dayton, Ohio are actually Turks (Meskhetians?) but got into the US as Uzbeks.

The men arrested in an Aug. 23 raid of their rented Allen Street home are suspected of conspiracy to commit wire fraud, illegally obtaining food stamps and a weapons charge.

Muzaffar Mirsoliyev, 28, and his 51-year-old father, Mustafo Mirsoliyev, both Turkish immigrants who were refugees from Uzbekistan in the mid-2000s, had criminal complaints against them unsealed in U. S. District Court for the Southern District of Ohio in Dayton.

Mustafo Mirsoliyev appeared at a detention hearing. Muzzaffar’s hearing was delayed until Friday. Muzaffar’s Russian wife, Fanisa Shaydullina, faces a weapons charge and authorities say she has been in the country illegally for about two years.

Shaydullina, who was previously identified as Turkish, has been put on 24-hour home detention and her case has been transferred to U.S. Immigration and Customs Enforcement (ICE).

Unsealed search warrant affidavits obtained by the Dayton Daily News show that Federal Bureau of Investigation Special Agent Michael Bush suspects the Mirsoliyevs of a scheme to defraud the U.S. Department of Agriculture and Ohio Department of Job and Family Services.

Wednesday, the Mirsoliyevs remained in the Montgomery County Jail on a federal detainer.

All three were arrested during the raid at 245 Allen St. during which multiple law enforcement agencies seized an AK-47 rifle and a computer.

For a chuckle, new readers might want to visit our post in August about how open borders advocate David Lubell (product of Nashville, TN) was in Ohio (Cleveland) to promote the joys of multiculturalism.

… be sure to re-visit my post of a couple of weeks ago about how David Lubell and ‘Welcoming America’ has just kicked-off its Cleveland campaign to convince residents that diversity is beautiful and they need to embrace more of it!  Entrepreneurial immigrants will save the city from economic ruin, they say. 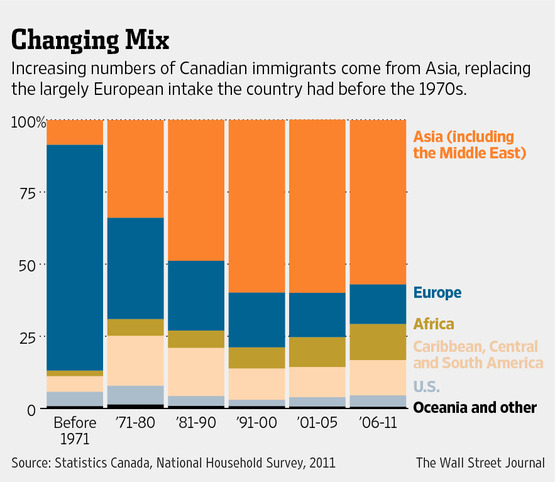 Revisit my post yesterday about ‘Little Mogadishu’ in Toronto before reading on.  Ha! Ha! I wonder what gave them the first clue that certain immigrants today aren’t integrating or helping the economic health of Canada.  The problem for Canada (and the US) is that hard left open borders advocates think they can tame the barbarians and you can be sure they are already hard at work to undermine this plan.

TORONTO—As American lawmakers debate how to revamp U.S. immigration policy, Canada has embarked on a major immigration overhaul of its own aimed at choosing newcomers who are a better fit for its economy and society.

This August, Canada began to accept its first immigrants under part of an overhaul that puts greater emphasis on factors such as an applicant’s job skills and fluency in English or French.

A major objective: Fix what the Canadian government sees as a growing economic chasm between locals and many of the immigrants that Canada’s old applicant-screening system selected—a chasm it worries could spark the sort of immigration-related social tension that has flared in other developed countries.   [Hint to the WSJ and the Canadian government it isn’t all about who makes more money—this is a cultural war between ‘civilization and barbarism.’—ed]

Canada accepts more immigrants per capita than any of the Group of Seven most-advanced economies. The country, which has officially embraced multiculturalism for decades, won mostly praise for how it selects newcomers, particularly through a points system that tries to evaluate an applicant’s ability to thrive economically.

But since the 1970s, pay among new arrivals has increasingly fallen further behind pay of locals. And some Canadians question whether immigrants are integrating well enough into Canadian society.

The WSJ reporter states the obvious!  Canadians have had it with this multicultural bulls***.

By some measures, public opinion also appears to have tilted away from Canada’s traditional open-armed multiculturalism.

Canadians went through a round of soul-searching last year after the high-profile convictions of three Afghan family members who murdered four other members they deemed too Westernized. In a December survey, 70% of respondents said too many immigrants aren’t adopting Canadian values, up from 58% in 2005, according to Environics Institute, a Toronto research group.

Editors note regarding the graph above.  European countries, and Canada too obviously, lump all ‘Asians’ together leaving you with the notion it’s mostly some nice Chinese grannies running dry cleaning businesses filling up the ‘Asia’ category.  To get a more accurate idea of who is coming, those from Muslim countries should have their own separate category on such a graph.

We have an entire Canada category, click here for our previous 116 posts on problems with refugees and asylum north of the border.