Mostly they think Obama lied to them.  They want the West to get into their civil war where they will love us when they are using us, but hate us later. 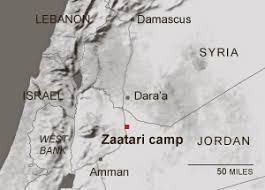 Before we get too far into this post, readers should know I am a firm believer in the Palin Doctrine which very simply says that when two groups of Muslims are having a civil war, let Allah sort it out!   Haven’t we learned our lesson from Afghanistan, Iraq, Egypt, and Libya yet!

Also, readers might want to review our earlier post entitled,  Kilian Kleinschmidt: The Syrians at Zaatari are the most “difficult refugees I’ve ever seen.”

Across the camp, five miles inside Jordan, Syrian refugees gathered in small groups to listen to Barack Obama. Some watched on al-Jazeera TV, others tuned in to the radio, many followed on Twitter or online news sites. Expectations were high.

“We thought, when he began to speak, the strikes on Bashar al-Assad’s regime were going to start immediately,” said one refugee, Abu Assam. “Then he said ‘but’.” In Arabic “but” is “wa lakin”, but in both languages the implication is the same. “It was when he said that word that everything came crashing down.” He added: “Obama lied to us.”

The Zaatari refugee camp is home to about 120,000 Syrians who have fled the war next door, the sound of which, on still nights, can be heard from across the border. The mood on Sunday was uniformly bleak. The news of the chemical attack in Damascus was devastating for those in the camp, said a UN official. Residents asked for no visits from journalists or dignitaries for three days. After that period of grief, amid all the tough talk by western leaders, refugees believed that something would be done to punish the Syrian regime.

“We know that many people are sympathetic to what is happening to us. It is the politicians and the British opposition, like Obama, who don’t seem to care. We will never forgive them for what they are doing.”

Politicians are frankly responding to the mood of their voters—no more military involvement in the Middle East!  This very same article reports that 75% of Americans want no more role in Muslim squabbles!

Another resident, Mohamed Mahdi, said: “We know only 25% of Americans back the strike.

For all of our reports on ‘Syrian refugees’ type those words into our search function.  I never did begin a separate category for posts on the topic.