Noticeably absent from this editorial from last week, however, is any mention of “Christians!”   The publication also suggests that Obama relax security screening that had been put in place after 911.

Demonstrating a complete misunderstanding of refugee resettlement in America (or is it an effort to mislead us) the CSM says this:

“It is time for Europe and the United States to be a safety valve and accept many more Syrians for temporary asylum.”

There is NO temporary asylum in America.  Refugees are permanently resettled in the US.  As a matter of fact, we received a comment recently where a reader assumed that refugees come here temporarily until their homeland is secure again.  NO!

Longtime readers know we have another immigration loophole called ‘Temporary Protected Status (TPS)‘ which is for those from certain designated countries who were in the US (visiting, on student visas, etc) when the problem happened back home—a civil war or natural disaster—who are supposedly allowed to stay only until the status is removed.  Syrians already in the US are now eligible for that program.  However, even when the trouble back home is solved, most of those on TPS NEVER leave, just ask the Salvadorans!  There are NO temporary refugees, so why the CSM editor says such a thing is beyond me!

Here is more of what the CSM says—to show our gratitude to certain Middle Eastern countries we need to take twelve thousand or so chosen by the UN! (and skip the security screening!):

The UN wants 30,000 of Syria’s most vulnerable refugees – mainly women and children – to be taken in by the US and Europe. About 20 countries in Europe plan to accept 18,000 Syrians. For now, however, the Obama administration has committed to resettling only “several thousand” Syrians.

One problem for the US is that post-9/11 laws make it difficult to screen asylum seekers from Muslim countries. The laws were designed to make sure terrorists don’t slip through. More than 135,000 Syrian refugees have applied for asylum. Last year, only a few dozen were allowed into the US. The Obama administration has legal ways to overcome the bureaucratic hurdles and begin granting far more temporary visas.  [There are no temporary refugees!—ed]

The US has called on Jordan, Turkey, and Lebanon to keep their borders open. For both humanitarian and security reasons – and out of gratitude to those countries – the US must now also open its border to the huddled masses of Syrian refugees.

For security reasons?  Now what the heck does that mean?  Surely they don’t mean we have to take them to keep them from becoming terrorists!

The talking points have gone out!   The UN wants the US to take 12,000 this year, the contractors want it too.  Will Obama do it—legally he can!

Gallup released a new poll this past week and check out where immigration/illegal aliens falls in the overall list of issues troubling Americans.  Of course the unemployment/jobs concern does directly relate to immigration.  Americans are not sitting home anxious for you to pass Comprehensive Immigration Reform.

Looks like the new Democratic talking point about income inequality doesn’t rank very high either.  Dissatisfaction with government itself ranks number one! 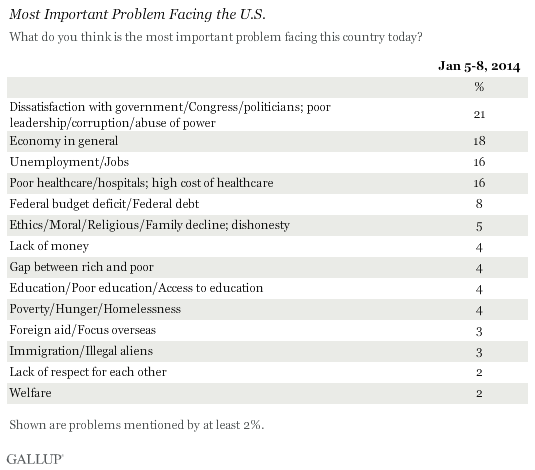 It’s not just Australia, Israel, Bulgaria, Italy and the rest of Europe trying desperately to hold back the tide of migrants from the Middle East/Africa and other third world nations, but even in South America there is no peace from largely economic migrants (all calling themselves ‘asylum seekers’) looking for new places to call home.

From Deutsche Welle (The star of this story is Mohammed from Syria):

Brazil has seen the number of asylum seekers increase nearly tenfold over three years and official agencies are woefully unprepared to deal with the refugees. Few people receive asylum and help for immigrants is sparse.

In Brazil, political refugees from the Middle East or Africa have been a rare sight over the last few years. The South American country appears far removed from the horrors of war on foreign continents. But that is changing. Between 2010 and 2013, the number of people seeking asylum in Brazil increased nearly tenfold, from 566 to 5,200. Adding to those numbers are thousands of immigrants from Haiti, Senegal, Angola, Liberia, Bolivia, Pakistan and Bangladesh.

“Brazil has to prepare for an increasing crush of immigrants,” said Andres Ramirez, who represents the UN’s refugee agency in Brazil (Acnur). Since 2013, the organization has been operating a small office in Sao Paulo. One of the biggest problems, he told DW, is the lack of emergency shelters. “Many refugees sleep on the streets for days before they get any help,” he said.

Of the 5,200 people applying for asylum in Brazil, just 649 were recognized, according to figures from the country’s Ministry of Justice. The largest group among them, 283, came from Syria, followed by the Democratic Republic of the Congo, with 106, then Columbia and Angola.

The largest group seeking asylum, however, were the 1,814 Bangladeshis. Just one was recognized as a political refugee. Senegal followed with 868 asylum seekers, of whom four were recognized. In other conflict regions, such as Lebanon, Guinea-Bissau and Somalia, acceptance rates stood at below 3 percent.

Such statistics don’t include the 15,000 Haitians in northern Brazil. Roughly 70 per day arrive in Brasilia, a city of just 10,000 in the state of Acre, bordering Peru.

The unofficial influx has become a political problem. In an extraordinary cry for help, the state government of Acre requested on Wednesday (15.1.2014) that the federal Ministry of Justice allow it to close the border to Peru.

As always, I wonder how the poor and destitute from places like Bangladesh are getting the money to travel half way around the world to Brazil.  And, do they all pass through Cuba on the way???  I suppose it’s just a matter of time before they work their way north to the US border!