The owners of three Yonkers groceries and two of their employees have been charged in a scheme to exchange more than $1.2 million in food stamps for cash.

Prosecutors, who began investigating some of the people as early as 2011, said the scheme has persisted for years at the three stores. Employees at the stores — two of which are in downtrodden sections of the city — would overcharge customers’ electronic benefit cards and then give the customers the cash while pocketing some of the money for themselves.

At 42 Post Deli Grocery on Post Street, prosecutors said, this meant the store owner and employee would keep about 50 percent of the cash; other stores kept smaller amounts.

These crooks are not always the brightest bulbs so one wonders how these young Middle Eastern or African men have been able to acquire small stores throughout America—who is helping them?

Why do I say they aren’t that bright, the feds only need to look at how much food stamp redemption goes on in comparable stores and that is what they did here.

At Sam Deli on Palisade Avenue investigators calculated that the store authorized $292,819 in benefits redemptions from March 2012 to February 2013, while similar stores redeemed as little as $8,433. Prosecutors said Gloria Garcia, 51, the owner of a third grocery, exchanged more than $800,000 in federal benefits for cash.

So where do these perps come from? Like most of these food stamp fraud cases, immigration status is not mentioned.

Four of those charged, including Garcia, were taken into custody Tuesday and arraigned in U.S. District Court in White Plains. The other three were identified as Ahmed Alsamet, 35, the owner of Sam Deli, and Shoiab Ahmed, 22, an employee there, who are accused of exchanging upwards of $250,000 in food stamps for cash; as well as Yousif Kassim, 30, the owner of 42 Post.

Kassim is charged along with Mufid Kassem, 36, an employee at 42 Post. Both are accused of exchanging food stamps for more than $200,000 in cash. Kassem remains at large.

Food stamp fraud reporting is a side interest here at RRW, click here for probably a hundred similar stories going back to 2008.  So far, the mainstream media has refused to make any connection between these scams and ‘immigrant (hah!) entrepreneurs.’

Go here for information on how to report suspected food stamp fraud where you live.

And, it would mean more expense for the “welcoming” community and “welcoming” Kentucky thanks to Catholic Charities of Louisville.*

Thang Lian is a resettled Burmese refugee student who attends Jefferson County Public Schools’ Newcomer Academy. In March, he turns 21, which means the district can no longer financially support his education.

So he’ll have to choose another path.

“My parents and my counselor were talking about next year I move to GED,” he says.

For some the GED high school equivalency diploma is an option; others may enroll in Jefferson County’s online alternative program.  [Take it from me, there is nothing wrong with going the GED route!  And, some one of the refugee contractor organizations could provide charitable tutoring along the way!—ed]

On Tuesday, Kentucky’s House Education Committee approved bill that would give refugee students like Lian an additional two years to graduate, extending state spending for these students to age 23.

Concerns center on additional costs and the fairness issue.  Although not raised here, do we want 23-year-olds in school with 14-year-olds?

But the Kentucky Department of Education is concerned about parts of the bill. For example, there could be additional costs to the state and local districts and equity issues could arise, like not providing the same opportunity for special education students, education department officials say.

As WFPL previously reported, officials estimate more than 500 school-age children have been resettled in Jefferson County alone over the past year. That number is expected to rise, officials say.

Further, data from the Kentucky Office of Refugees (aka Catholic Charities) shows over 100 refugees between the ages 14 and 17 have been resettled each year throughout the state over the past several years.

* Louisville is the center of Jefferson County.

So who is bringing all the refugees to Louisville?  Why it’s none-other than Catholic Charities of Louisville which is coincidentally also the Kentucky Office for Refugees.  Gee, sounds like Tennessee where Catholic Charities calls the shots on the demographic change for the state.   Progressive Catholics are busy changing the South!

We wrote about them just last month here.

Thank Catholic Charities too for bringing all the Muslims to Louisville where 8 mosques now serve the growing Muslim community….

… including thousands of refugees from such lands as Afghanistan, Iraq, Somalia and the former Soviet Union and Yugoslavia.

A trip down memory lane:  In 2007, then Bush Asst. Secretary for refugees, Ellen Sauerbrey, told an audience in Louisville that we bring refugees to America to keep them from becoming terrorists!  Funny in light of the fact that Kentucky should have been the home for those two Iraqi refugee terrorists subsequently caught there.

See yesterday’s post about how many refugee teens are not finishing high school.  Maybe Catholic Charities could offer tutoring services through private charitable giving (of time or money) by local Catholics, or better still, give all those refugee kids free tuition to private Catholic schools until age 23!

In one photo accompanying the story in Aljazeera, protestors (mostly men) seeking asylum carry a sign that says they are not “dangerous.”   Then here is another photo in the same spread that surely doesn’t look like they are exactly meek and neighborly either—why the raised fists?  Is it the pose of Islamic conquerors? 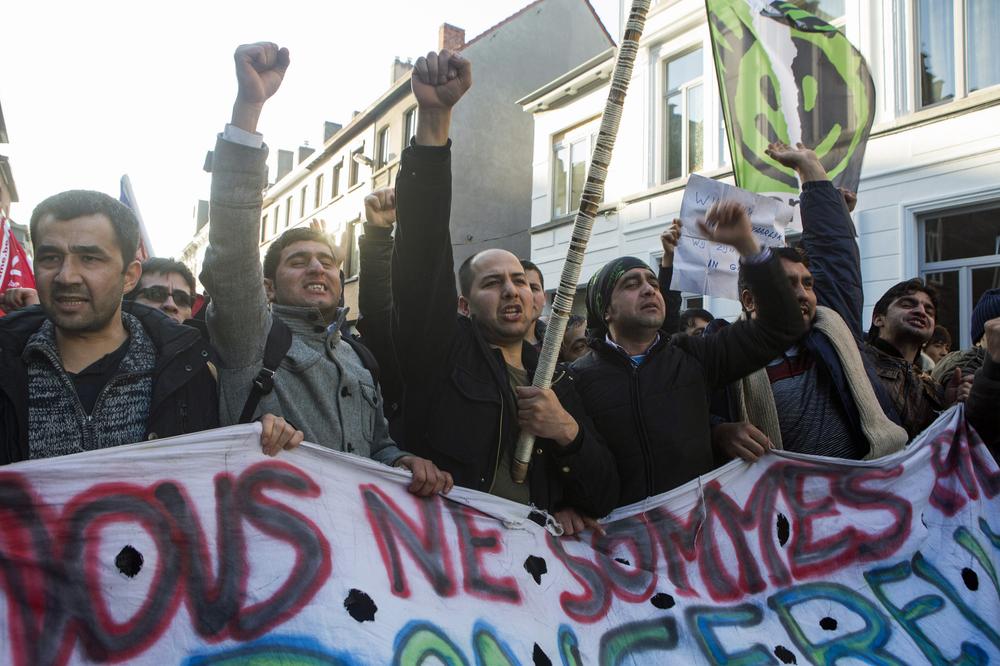 This is the latest protest story from Aljazeera (hat tip: pungentpeppers):

For the second time in less than a month, hundreds of Afghan asylum seekers and their supporters held a three-day protest march in Belgium.

The 70-km march started on January 11 in Brussels and ended in Ghent. The aim was to publicise the situation of Belgium’s Afghan asylum seekers, and put pressure on the Belgian government to provide protection and legal residency.

After the first march, Belgian Prime Minister Elio Di Rupo expressed some sympathy for their situation. But Maggie De Block, the secretary of state for asylum and migration and for social integration, has taken a tougher line. During the march, the protesters stopped in front of her home and left her a symbolic bus ticket to Kabul, Afghanistan’s capital.

Many of the participants had been denied asylum despite the fact that Afghanistan is still insecure. Some Afghans have even been deported. The group of Afghan asylum-seekers, some of whom have lived in Belgium for years, began protesting last year after some of them were denied asylum. Two hundred of them, including women and children, have been occupying a church in the center of Brussels for the past four months – where they have access to only two toilets.

This is our previous post on Afghans demonstrating in Belgium, poor Belgium.