Readers, if you have been following the coverage of the deadly explosion and fire that ripped through a Somali apartment building and grocery store on New Year’s Day, you are not alone.  A Minnesota follower of RRW has alerted us to a blog that has gone one step further and contacted some of those quoted or misquoted by the Minneapolis Star Tribune.

For new readers looking for background, our most recent post is here with links to previous posts.

Now, check out the blog Lee Stranahan (Untangling the facts….) which begins with this:

I’ve been covering the story of the explosion and fire that took place in the Cedar-Riveraide neighborhood on Minneapolis, Minnesota on New Year’s Day. There’s been a fair but [bit] of misinformation and confusion. This post is designed to clear up some of that with unfiltered facts from spokespeople for the gas company CenterPoint and the Minneapolis Police Department.

Come back tomorrow because surely there will be another installment of this puzzling case.

Where they could face “inhuman or degrading treatment” say the UN bullies.

Here is the story from Fox News:

BERLIN –  The United Nations’ refugee agency is urging European countries to hold off returning asylum seekers to Bulgaria, citing problems with access to basic services and with asylum procedures.

Under the “Dublin procedure,” European Union countries return illegal migrants to the first EU country they entered. Bulgaria is on the bloc’s eastern edge and has seen increasing numbers of asylum seekers in recent months, among them people fleeing Syria’s civil war.

The U.N. High Commissioner for Refugees urged other countries Friday to suspend returning migrants to Bulgaria because of risks they could face “inhuman or degrading treatment”; it plans to review the situation in April.

April! More likely May after the EU Parliament elections so they don’t tick-off the rightwing so much that they defeat some of the socialists who now run the EU!

It says Bulgaria has made progress but problems remain with asylum seekers’ access to food and health care, registration delays and risks of arbitrary detention.

You can see that my sympathies are with Bulgaria.  For more on Bulgaria’s “refugee crisis,” click here.

Photo is from this story at Top Conservative News.

Normally an article about a Refugee lobbying group in Washington coming out to a rural area to show a “climate refugee” film wouldn’t be of much interest.   However, this one caught my eye because the film was being promoted in Wyoming.

New readers need to know that Wyoming is the only state in the union that does not participate in refugee resettlement; and I have no idea how they got out of it in the first place.  My suspicions have always centered around the fact that former Wyoming Senator Alan Simpson argued against the bill when it was first introduced by Senators Ted Kennedy and Joe Biden in 1979 and perhaps he was able to keep his home state free of the costly-to-taxpayers program.

Refugees may arrive as secondary migrants to Wyoming, but I suspect the number is very small.  That is why it was amusing to me to see the rich people in Jackson Hole being ‘educated’ by Refugees International.  Refugees International (RI) is NOT a resettlement agency/contractor, yet they travel around the world looking at refugees, writing reports and mucking around in the refugee lobbying scene in Washington.  Perhaps they are involved with intelligence gathering (don’t laugh, some of these NGOs have a good cover for doing just that!).

We wrote about RI a lot a few years ago when they were headed by the now deceased Ken Bacon.  ‘Old heads’ will remember that Bacon’s claim to fame was that he illegally released Linda Tripp’s personnel file at the Pentagon in 1998 during Clinton’s Monica Lewinsky scandal.

Bacon then became head honcho of Refugees International and just before his death he funded RI’s Bacon Center for the Study of Climate Displacement which opened in 2009.

This brings me to the article that caught my eye at Public News Service where we are told RI board member and Jackson resident, Tatiana Maxwell, showed the film and talked to the press.  (Emphasis below is mine)

JACKSON, Wyo. – There’s a warning about a new kind of refugee crisis – one connected to a changing climate. Stories about how climate-related disasters are displacing people around the world are featured in a new film that was shown in Jackson on Sunday. The documentary comes from Refugees International, a nonprofit that works to end displacement crises worldwide.

Refugees International board member Tatiana Maxwell lives in Wyoming, which she admits feels far away from the natural disasters documented by the film – disasters increasing in force and frequency around the world.

“Wyoming has had its own share of refugees coming from different places,” she said. “There will be 250 million people who are going to have to find someplace else to live by 2050.

Really?  Wyoming has had its own share???  And, then this, we are going to clear out West Africa and bring them to the rich communities in the west—like Jackson Hole? Not!  Just a reminder Kennedy didn’t bring them to Hyannis either, and Biden’s Delaware gets only a tiny handful of refugees!

“This is affecting 20 million people, for instance, in West Africa,” she said. “It’s highly unlikely they’re going to be able to continue to live there. They don’t want to move, but it’s become increasingly impossible for them to live there.”

Maxwell added that their goal is to make sure people have safe places to live, not to debate the politics of climate change.

So who is Tatiana Maxwell?  I didn’t find much, but she and her husband Paul (it appears he may be an energy company executive) are big donors to RI (here). 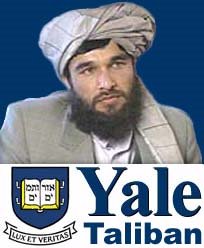 Do you remember not long after 911, a Taliban spokesman was traveling America to defend the Taliban in Afghanistan?  He became known as the American Taliban and got a slot at Yale!  His name is Sayed Rahmatullah Hashemi and he was here as a representative of Mullah Omar.   I don’t know what happened to him after his highly publicized admission to Yale, but guess who helped fund him—Paul and Tatiana Maxwell of Jackson Hole, Wyoming.

How is it that people like Hashemi ‘find their way’ to elite neighborhoods?

See this very informative piece from 2006 at Greater Yellowstone entitled ‘Taliban in Jackson Hole’.  Author Daryl Hunter is not very kind to Maxwell.  Hashemi may be one of the few “refugees” to pass through Wyoming in many years!

By now most Americans have heard about Sayed Rahmatullah Hashemi, the Taliban’s former ambassador-at-large, who is now attending Yale, his education funded by the International Education Foundation, which was created for Hashemi by Jackson Hole residents Mike Hoover, an adventure film maker, Paul and Tatiana Maxwell, and Jackson Attorney Bob Schuster.

In his article “Jihadi Turns Bulldog,” printed in the Feb. 26 Wall Street Journal, John Fund wrote about how, during Hashemi’s spring 2001 Taliban public relations blitz, Hashemi visited the Wall Street Journal and told Fund that Osama bin Laden was a “guest” of his government and it hadn’t been proven that bin Laden was linked to any terrorist acts. Hashemi said that if the embassy bombings were terrorist acts, then so was the Clinton administration’s cruise missiles attack in his country in an attempt to kill bin Laden. “You killed 19 innocent people.”

“I felt I had looked into the face of evil,” Fund wrote after Rahmatullah defended the Taliban’s treatment of women and said he hadn’t seen any evidence that their “guest” Osama bin Laden was a terrorist.

In the spring of 2004, Hoover proposed to Hashemi the possibility of attending college in the United States. Hashemi jumped at the opportunity to leave Pakistan to attend school in the U.S.

The Times reported that Bob Schuster, a Yale alum, “called the [Yale] provost’s office to ask how an ex-Taliban envoy with a fourth-grade education and a high-school equivalency degree might go about applying to one of the world’s top universities.” Richard Shaw, dean at Yale, was intrigued and suggested that Rahmatullah come to New Haven for an interview. Shaw said the admissions office once had another foreigner of Rahmatullah’s caliber apply for special-student status. “We lost him to Harvard,” he says in the Times. “I didn’t want that to happen again.”

Fund summarizes: “I don’t believe Mr. Rahmatullah had direct knowledge of the 9/11 plot, and I don’t think he has ever killed anyone. I can appreciate that he is trying to rebuild his life. But he willingly and cheerfully served an evil regime in a manner that would have made Goebbels proud. That he was 22 at the time is little of an excuse. There are many poor, bright students ­ American and foreign alike ­ who would jump at the opportunity to attend Yale. Why should Mr. Rahmatullah go to the line ahead of all of them? That’s a question Yale alumni should ask when their alma mater comes looking for contributions.”

There is a lot more, especially read about the author’s speculation about how it is that western women could possibly support anything the Taliban does in light of how they treat women in Afghanistan which really is the whole point Hunter makes in his piece.

See our Climate Refugees category for more on how the Left is pushing this newest excuse to open borders worldwide.