“I feel hurt by the fact that a specific demographic at Wellstone has been taken away from us.”

When I read this story at Minnesota Public Radio I couldn’t help but think about buggy whips.  You know the expression about how as times change, so too do industries when the demand for certain commodities disappears.

But, the big difference is that with government programs, those benefiting certain people personally (with jobs etc.), instead of dying a natural death, taxpayer dollars are found to keep the government equivalent of the buggy whip industry alive.

At one time Wellstone High School, a special school for immigrants, was 65% Somali, today it is 30%, and those benefiting from the refugee industry generally in Minnesota are crying the blues. 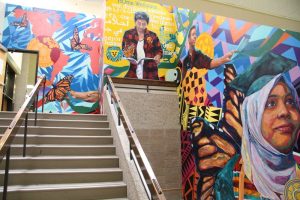 [Big opening section featuring a Somali success story to appeal to readers’ emotions before launching into the difficulties ahead for a special school for special people.]

For nearly two decades now, Wellstone has served as a training ground for hundreds of young refugee and immigrant students, many of whom grew up to be economists, health professionals and engineers — even as its population has fluctuated with each stroke of a presidential pen that expanded or reduced refugee admissions to the United States.

In recent years, though, not many people like Mah are entering the country because of the Trump administration’s crackdown on immigration and the sharp reduction in refugee admissions. As a result, Wellstone is bracing for one of the lowest student enrollment years in its history.

But it’s not just Wellstone that’s witnessing the ripple effect of the dwindling number of refugees entering the country. Refugee-serving agencies in Minnesota have also seen a dramatic decline in the number of refugees coming to their doorsteps for resettlement services.

To keep the infrastructure alive, Wellstone and service agencies are finding new ways to adapt to the changing refugee-services landscape — by shifting resources and tapping into new demographics.

Donald Trump is to blame….

After he took office in 2017, the president followed through with many of his promises. For example, he barred people from certain predominantly Muslim nations, including Somalia, from entering the U.S. and reduced refugee admissions to the lowest level since the program was created in 1980.

Those restrictions have affected the refugee stream to Minnesota, which for years has been one of the top states for refugee resettlement. More than 3,000 primary refugees arrived in Minnesota in 2016, but only 1,000 came in 2017, and 660 last year, according to figures from the Minnesota Department of Human Services.

The dramatic reduction in refugee admissions will be felt this school year at Wellstone, where the student population has dropped from 400 four years ago to 180 now, according to school counselor Ali Kofiro.

Though the students at the school have come from all over the world, including East Africa, Southeast Asia, Central America and Mexico, Somalis typically were the majority. In 2015 and 2016, for instance, 65 percent of the students were Somalis. Today, that number is less than 30 percent.

“I feel hurt by the fact that a specific demographic at Wellstone has been taken away from us,” said Aimee Fearing, former Wellstone principal who now serves as the executive director of K-12 academic programming at Minneapolis Public Schools.

The reduction in refugee admissions is also affecting nonprofit organizations and resettlement agencies that often rely on serving refugees to get funding.

Continue reading here.  It is a long article, but useful especially for Minnesotans as it goes on to discuss the refugee contractors operating in the state and how they are adjusting (or not!) to the loss of much federal funding.

Endnote: One wonders about assimilation if the immigrant kids are kept separate and treated as special people in their own special school.