Editor’s note:  Concerned about growing assumptions that the recent Trump Executive Order will solve the problem of no local or state say about refugee admissions, a long-time observer of the program with legal expertise, David James, has explained for us that the EO does not do what it purports to do.

Although grateful that the President has signaled his concern for a major flaw in the program, we must set the record straight.

For new readers, VOLAGs (short for Voluntary Agencies), is the refugee industry title by which the federal refugee contractors refer to themselves. 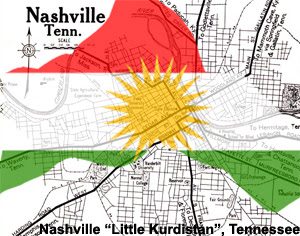 Decisions made by federal agencies and the VOLAGs (voluntary agencies) they pay, about where to place arriving refugees, along with secondary migration, have created Minneapolis’ “Little Mogadishu”, Nashville’s “Little Kurdistan” and Ft. Wayne’s “Little Burma” to name just a few of the refugee ethnocentric enclaves.

No executive order, including the President’s recent Executive Order on Enhancing State and Local Involvement in Refugee Resettlement (EO) can stop refugee migration, either initial or secondary, from changing the demographics of your town and/or state.

While the EO suggests that the federal government will not resettle refugees in communities unless both the state and local governments consent, that may not be what happens at the end of the day.

Putting secondary migration aside, Section 2(b) of the EO specifically preserves the authority of the three agencies which administer the refugee resettlement program (State, HHS and DHS), to override any non-consent to refugee placement by either the state and/or local government.

With the exception of the lowered cap of 18,000, the EO is more a restatement of consultation requirements with state and local governments which are already in statute and regulation. Not only is the concept of “consultation” nowhere defined, but the outcomes of any consultation are not binding on federal agency decisions on refugee placement. And the EO doesn’t make any non-consent binding either.

The U.S. Code sections referenced in the EO mean that non-consent for resettlement won’t stop family reunification or the participation by the VOLAG federal contractors in deciding where refugees are placed.

However, as Ann Corcoran reminds us, the refugee cap has not included other categories of entrants such as the Special Immigrant Visa holders from Iraq and Afghanistan who receive the same access to public benefits, such as state Medicaid programs, as refugees. The same goes for any successful asylum petition.

And once on the ground, refugees can and do go anywhere they want, nullifying any state and local non-consent per the EO.

Governors in Oregon and Pennsylvania have already issued consent to receive refugees and New Jersey’s governor has announced the state’s intention to get back into the resettlement program.

While some refugee arrivals may stay put at their initial resettlement site, for others, consenting states will be nothing more than ports of entry for movement to non-consenting states and local communities.

The EO does not directly address the status of states which previously withdrew from the  resettlement program for purposes of non-consent. It’s possible that this question will be answered by the “process” to be developed by the State Department and HHS as required by the EO.

States like Tennessee which withdrew from the refugee program over 10 years ago, have since had their state refugee program administered by an ORR (U.S. Office of Refugee Resettlement) selected NGO which just happens to have its own federally contracted refugee resettlement program.

When the Refugee Act was passed in 1980, Congress authorized reimbursing states 100% for three full years of the state cost of providing Medicaid for each refugee brought to a state by a federal contractor. Sen. Ted Kennedy, the chief sponsor of the Refugee Act was pushing for four years of refugee support as opposed to the House proposed two years of support:

“[i]n my judgment, it is essential that we continue to receive the full support of State governments for our refugee programs; I believe that we would jeopardize that support and cooperation if we were to transfer the resettlement burden to the States after the refugees have been in this country for only 2 short years.”

The House and Senate subsequently agreed to three years of reimbursement to states.

Feds shift cost to the states

Five years into the program, due to cuts in federal spending for refugee assistance, ORR began to reduce the three years of authorized reimbursement to states and by 1991, eliminated it altogether. Three years later in 1994, the federal regulation permitting a state to withdraw from the program and be replaced by an ORR state replacement designee, was added.

Beginning in 1990, various federal reports have admitted to shifting costs associated with the refugee program to state and local governments. State governments continue to incur these costs, even after withdrawing from the federal refugee program because federal contractors are enabled by ORR to continue initial resettlement in these states.

It remains to be seen whether these ORR designated state replacements which operate independently of the state government, will also have authority to consent for the state per the consent process required by the EO.

Tennessee has sued the federal government because of its Constitutionally impermissible taking of state funds for the federal refugee program by virtue of the cost shifting. The admissions to shifting federal program costs to states stand in stark contrast to the claims of the federally funded and financially dependent contractors that the program is “100% paid for by the federal government.”

President Trump’s EO fails to address the multiple layers of dysfunction in the resettlement program and Constitutionally suspect policies. Nor is there any reason to think that Congress will find its way to straightening out the mess they helped to create and continue to foster.

Endnote: It is vitally important that you send this detailed analysis to everyone you know.  We can support this President while at the same time pointing out where he might be going wrong on an issue that many of us believe is paramount to putting America First!

Mark Krikorian at the Center for Immigration Studies addressed many of our concerns about the EO in his piece at National Review yesterday, see it here.