Church World Service , as I reminded everyone just last week, is one of nine federally-funded refugee contractors.  Its most recent political agitation stunt was to join with the Council on American Islamic Relations on the steps of the Capitol and see its CEO arrested. 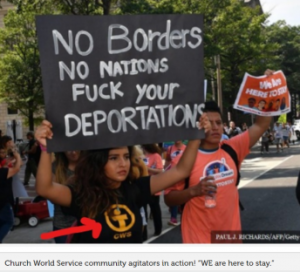 Now we hear they have given awards to their great defenders in the House and Senate—Marco Rubio among them!

Just so you know, CWS has received nearly half a billion of your tax dollars over the last ten years, see here.

And, in addition to placing refugees throughout small-city America they oppose the President by promoting open borders, and supporting the continued entry of illegal aliens into the US!  Does “little Marco” know that?

On Wednesday night, two members of the Florida delegation were honored for their work on international humanitarian issues.

Diaz-Balart was one of 16 members of the House to tell the President they wanted more than 18,000 refugee admitted this year.

“I am honored to receive this award from Church World Service. I will continue to work to support and uplift communities across the globe, ensuring that all people have the opportunity to fulfill their God-given potential,” said Rubio who sits on the U.S. Senate Foreign Relations Committee.

LOL! We should be glad that government contractors give awards like this because it helps us identify who exactly is working against the principle of America First!

For new readers, thank Church World Service for this blog since they were the federal contractor which was quietly placing refugees into my county in 2007.  So frustrated by the local paper which refused to give the citizens in our rural Maryland county any information about CWS or its subcontractor, the Virginia Council of Churches, I decided to investigate myself and publish what I learned.

CWS is a hard Left (taxpayer-funded) political organization (masquerading as a ‘religious charity’) that is changing America by changing the people.

Does Church World Service represent your church, go here and find out! If your church is doing a “crop walk” then you are sending money to CWS.

By the way, surely Senator Rubio sees this award as a political freebie!  If you live in Florida take a minute and tell him that you don’t agree with him on refugee resettlement (by taking this award he signals where he stands!).