It is extremely rare for an entire month to pass with no refugee admissions and needless to say the refugee industry spokesmen are not happy.

No refugee arrivals means no per head payments for the contractors!

We reported earlier that two different dates were given for resumption of taxpayer-funded flights of refugees to arrive in the month of October.  CNN is now reporting that the first refugees of FY2020, which began on October first, might not get here until November 5th.

No refugees will be resettled in the US in October, leaving hundreds in limbo around the world

Washington (CNN)  The United States is on track to not admit any refugees in October, after already canceling around 500 flights this month, CNN has learned.

A pause on admissions that was expected to lift on Tuesday will now extend into November, leaving those who expected to resettle in the US in limbo. It also means additional travel will need to be canceled and re-booked at the expense of federal taxpayers.

That previous line gave me a chuckle—they are worried about taxpayer expenses!  Since when?  And, by not bringing any refugees in October taxpayers were spared at minimum a quarter of a million to a million dollars in just the cost of resettlement, let alone the initial cash handouts and social service (aka welfare) expenses the refugees incur upon arrival.

The moratorium will run through November 5, according to a State Department spokesperson. “We will work with our implementing partners to plan for a resumption of refugee arrivals, including rescheduling travel for those affected by the extension,” the spokesperson said in a statement.

It’s the third time this month that the State Department has delayed refugee admissions. Travel for refugees who were told they could come to the US was postponed through October 21, and then later to October 28. There’s usually a pause in arrivals the first week of October.

The Trump administration has proposed capping the number of refugees allowed into the US at 18,000, a historic low. But in order for refugees to be admitted in the new fiscal year, President Donald Trump has to sign off on the refugee ceiling. The consistent delays in travel suggests Trump has not signed it yet.

The latest travel delays come as the humanitarian crisis in Syria worsens. 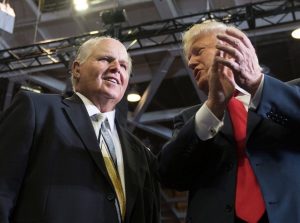 Trump gave a speech on October 23rd about the US pulling back in Syria and here is what Rush Limbaugh said about Trump and his comments.

He gave a mini-barn-burner here. He ripped into Obama. He ripped into previous presidents for a bunch of basic dishonesty in committing American troops around the world. He pointed out that the Middle East has become more unstable as more troops have been deployed. The wars have never ended.

And he made a great point, that as we have continued to send troops to these areas of the Middle East and as the chaos in these areas has ratcheted up, guess what else has happened at the same time? We have opened our borders to more refugees and more immigrants. And Trump says these days are over.

We’re not gonna go sponsor chaos and then say out of compassion, “Well, come here,” and open our borders. We’re not falling for this anymore.

This is exactly why Trump got elected.

He made it very clear what the game has been.The State Department, the permanent Washington establishment commits American troops to little skirmishes here and skirmishes there, and nobody ever wins because they never end. We recycle troops. We sell more ammunition and more weapons. The areas become war-torn and unlivable and the people that live there flee, and they go to Europe and some want to come here.