They want out of the Rainbow Nation! According to the UN, 268,000 African ‘refugees’ have flowed into the country from elsewhere in Africa presumably believing the propaganda that the new post-Apartheid South Africa held out a beacon of welcome to one and all.

They want out of the Rainbow Nation because they claim that the black majority that runs the country is discriminating against them.

The expanding crisis for the UN High Commissioner for Refugees now includes a major protest where hundreds are camped outside their offices in Pretoria and have been there for weeks.

Before I tell you the latest, know that the US State Department has been taking some of the supposed ‘refugees’ to live in Anytown, USA. Therefore, this story should matter to you! 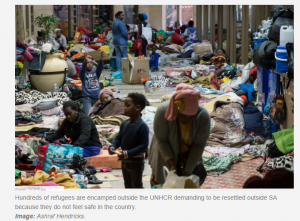 ‘Our blood does not want to be spilled in the land of SA,’ say refugees camped outside UNHCR

For two weeks, the walkway of the Waldorf Arcade has housed rows of makeshift bedding, screaming children and exhausted refugees begging the United Nations High Commissioner for Refugees (UNHCR) to remove them from SA.

South African whites are not the aggressors!  This is tribalism straight up!

“They are killing us, burning us alive, looting our shops,” said Eke Lyke Chibuzor, a refugee from Nigeria, who has been in SA for the past six years. “Sometimes I feel like I’m a slave in this country. Our blood does not want to be spilled in the land of SA.”

“Some people have asked what’s going on, but they did not send anybody to ask us if we still need documentation and those things,” said Sylvie Nahimana, a refugee from Burundi.

“All those things we have been asking them for almost 11 or 12 years … We don’t want those things any more. What we need is just to be out of this country, because we don’t feel safe [here].”

She said it’s too late for negotiations. “We are not moving an inch,” said Nahimana. “We want them to come up with a solution. We want out of SA.”

On October 14, the UNHCR released a second statement citing a two-day visit from the UN Refugee Agency High Commissioner Filippo Grandi. He met with representatives of refugees and asylum seekers and “listened to their concerns, mainly linked to better access to documentation and information, the process to obtain refugee papers, as well as issues of personal security”.

The statement noted that Grandi “told [the refugees] that UNHCR will continue to develop its dialogue with them…”.

Going against the media meme that those who have been oppressed won’t become oppressors—that black people can’t be oppressors!  Is that why so few US media outlets ever mention what is happening in SA?

Francine Kinavuidi, from the Democratic Republic of Congo, has lived in SA for 15 years. She still receives xenophobic threats from co-workers.

The UNHCR released a third statement on October 16, saying “Grandi commended SA’s commitment to protecting people fleeing countries affected by conflict, violence and persecution” and “noted that resettlement to third countries is a very limited option for refugees worldwide, as the number of resettlement places available globally is unfortunately dropping.

For most refugees here in SA resettlement is not an option.”

However, over the years some have been moved from the Rainbow Nation to the US.

Although the number is small, even in this last fiscal year, during the Trump Administration! we admitted 64 supposed refugees from SA.

South Africa post-Apartheid was billed as a progressive welcoming country when black South Africans took the reins of government, so there is no reason the US should have to take one single refugee from this supposed African dream country!

Here is one page from the State Department’s Refugee Processing Center database showing the number of ‘refugees’ we took into America from hundreds of countries around the world. These are called “Processing Countries.”  Those arriving from these locations are not nationals of the country, they are just being processed in from that location.

(There is another page. I screen shot only this one.) 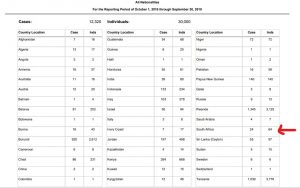 See my complete South Africa archive.  The black-on-black xenophobia has been going on for at least a decade.

And, see that our old pals at Church World Service are the primary UN/US State Department vehicle for Africans being placed in the US.