But he is not alone.  Continue reading to see which other Republican Senators have joined with some of the most vocal Open Borders Dems in opposing (slamming!) the President on the refugee ceiling for the new fiscal year which began on Tuesday.

Sen. James Lankford on Friday came out against the Trump administration’s plan to reduce the number of refugees allowed into the United States.

“I’m disappointed to see that the administration has once again decided to decrease the number of refugees we allow into our country,” Lankford, R-Oklahoma City, said.

“Over the last few months, the Department of Homeland Security implemented multiple policies that have resulted in a decrease in migrants at the U.S. southern border.

“While I appreciate the administration’s focus on curbing illegal immigration and caring for asylum seekers, that doesn’t mean we should continue to reduce the admittance of refugees who are fleeing from persecution in their home countries to support these policies.”

Lankford and Sen. Chris Coons, D-Del., sent a letter last month wrote a letter signed by other senators to three of Trump’s cabinet secretaries urging the refugee cap to be raised from this year’s level. [That would mean they were pushing for more than 30,000!—ed]

The letter, signed by several other senators from both parties, states, “At a time when we are facing the ‘highest levels of displacement on record,’ according to the United Nations Refugee Agency, we urge you to increase the refugee resettlement cap and to admit as many refugees as possible within that cap. America has a responsibility to promote compassion and democracy around the world through assistance to vulnerable and displaced people.”

The letter is here, but as I mentioned previously no specific number of refugees is proposed leaving them free to blast the President for whatever number he recommended.  (The Open Borders agitators were pushing for 95,000 knowing full well that would never happen.)

Here are the signers of the letter in addition to Lankford and his sidekick, Senator Chris Coons (D) of Delaware.

I think it’s kind of handy to have this list of the hardcore promoters of more refugees in the US Senate. (Rs are on the Left and Dems on the right.) 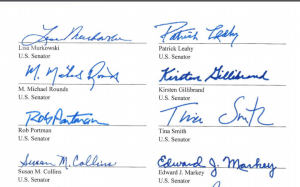 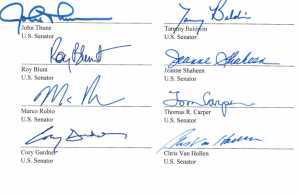