I reported here just a few days ago that hundreds of Africans were camped in front of the UN High Commissioner for Refugees office in Pretoria demanding to be resettled in the West after experiencing xenophobic hatred from black South Africans.

Additionally, I reminded US readers that we are taking some of those migrants to America as ‘refugees.’

They went to the mythical Rainbow Nation because they believed the international propaganda that the socialist government there welcomed one and all.

Media worldwide has been reluctant to tell the truth about post-Apartheid South Africa because they have built up for 25 years the false image of the governing black party, the African National Congress, as a model for the world!

I see this morning that worldwide media is now paying attention after South African police blasted water cannons and began arresting the protesters of many African nationalities outside of UN offices.

Apparently the UN was impotent to stop the violence.

Here is AP (one of many stories about the violence against ‘refugee’ wannabees):

JOHANNESBURG (AP) — Police in the South African city of Cape Town used water cannons Wednesday while arresting and dispersing hundreds of refugees and asylum-seekers, including children, who had camped for weeks outside the U.N. refugee agency’s office seeking protection after anti-immigrant attacks. 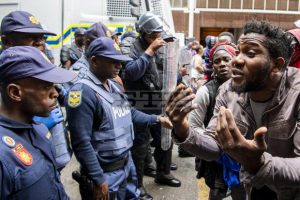 Local human rights and legal groups expressed shock over images of small children clinging to people being dragged away by police. Some people screamed in protest as officers with riot shields and batons moved through the crowd.

Police said they arrested about 100 people who “failed to heed the call to disperse.” Many who weren’t arrested fled to a nearby church.

Some refugees and asylum-seekers had told local media they wanted to be relocated outside the country after a wave of deadly attacks on foreigners in South African cities earlier this year. Such attacks have erupted several times over the years in sub-Saharan Africa’s most developed economy.

They can’t call it racism because both sides are black, so xenophobia best describes the rampant discrimination.

Earlier this year more than 12 people were killed and over 700 arrested after bands of South Africans in Johannesburg and the capital, Pretoria, launched attacks against foreign-owned shops and stalls, looting and burning them and attacking some shopkeepers.

Ramaphosa’s government has faced criticism for not explicitly speaking out against xenophobia at first but instead framing the violence as crime.

Ramaphosa, who later called the xenophobia “regrettable,” has acknowledged frustrations about South Africa’s high unemployment — now 29%, the highest in more than a decade — and its sluggish economy, but he has told his countrymen not to take it out on foreigners.

I repeat!  Pay attention! In recent years, including in 2019, we have admitted as refugees to the US some of the Africans who traveled to S. Africa from elsewhere in Africa!

We should consider giving refugee status to white South Africans.

However, most of those demonstrating at the UN office are not legitimate refugees, but are economic migrants—they are South Africa’s problem, not ours!