As many of you may recall, at this time last year the Trump Administration set the CEILING, for resettlement of refugees largely chosen by the UN for the fiscal year, at 30,000.  And, that is exactly how many refugees were admitted and distributed to 48 states and the District of Columbia.

That 30,000 does not include the Special Immigrant Visas (SIV) from Iraq (181) and Afghanistan (7,501!) who entered the US this past fiscal year with all of the benefits refugees receive (welfare, food stamps, job counseling, housing, medical care and the list goes on!)

For the fiscal year that begins today, the President has reduced the ceiling (or cap) to 18,000 and by doing so has lit a firestorm in the refugee industry that includes Open Borders advocacy groups, federal resettlement contractors, and businesses which are freely admitting that they need the steady flow of cheap legal labor (labor that doesn’t complain and can’t readily leave!).

So from what countries did they originate and which states were the most ‘welcoming?’

All data is from the US State Department’s Refugee Processing Center.

The top five sending countries (FY19) in descending order are these:

Afghanistan (if you add the SIVs, Afghans would make up the second highest number of taxpayer supported ‘refugees’ for this year.)

Muslim refugees made up about 16% of the 30,000.  However, virtually all of the SIVs are Muslims so that would push the percentage of arriving ‘refugees’ who are Muslims to 33%.  No Muslim ban! 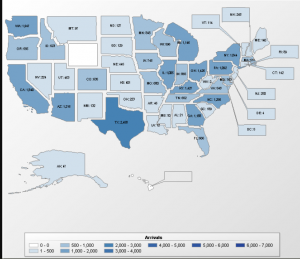 I know the numbers are difficult to read so here are the top ten ‘welcoming’ states for FY19:

Wyoming has never agreed to resettling refugees in the history of the program.  And, then Hawaii rarely gets any.

Delaware got one refugee in FY19 and it also usually only gets a handful—a fact that has always made me laugh since their homeboy, Joe Biden, was one of Ted Kennedy’s sidekicks when the program was created in 1979/80. (Ha! And, don’t say it is because the state is geographically small, RI is smaller than Delaware and it usually gets a bundle!).

West Virginia got 2 refugees, and the District of Columbia got a whopping total of 5 refugees!

This post and others like it is filed in two categories here at RRW:  Refugee Statistics and Where to find information.