***Update***  I just went back after a few hours to see if any national media has picked up the news, and nope, nothing yet. A few more bits of news by the protesters themselves, like this Catholic news outfit crowing that the Catholics (not to be left out!) were there too!

Okay, so yesterday was the big protest day for Church World Service and the Council on American Islamic Relations (CAIR) so I figured surely there would be gobs of media reports on the success of their anti-Trump protest especially since they succeeded in getting arrested!

Where is the WaPo?  Where is CNN?  Anyone see any coverage?

By the way, who comes up with this hokey stuff?

The only news I found so far comes from organizers Amnesty International and another Lefty outfit called Common Dreams.

In response to the Trump Administration’s continued assault on the U.S. refugee resettlement program, 18 leaders from the nation’s leading faith and human rights organizations, as well as a former State Department official, were arrested on Capitol Hill as part of the first ever act of civil disobedience in the name of refugee resettlement. Those 18 arrested represented the 18,000 refugee cap set by the Trump administration – the lowest in the history of the resettlement program.

Continue reading here if you want to see what each of the protesters had to say.  If not, see who sponsored the publicity stunt:

Where is HIAS I wondered, they usually love to protest in Washington?
The large gathering….. 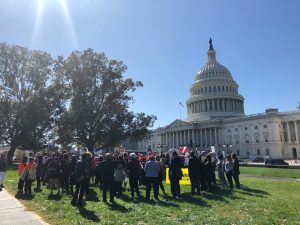 2 thoughts on “18 Arrested on Capitol Hill Protesting Trump Refugee Policy, but where was the Media?”