Tomorrow is the previously stated date for refugees to begin arriving again in large numbers.  They have been trickling in, probably a couple of hundred in the last two months since refugee travel was halted by the United Nations, but the US Refugee Program is largely shut down.

Special Immigrant Visas do continue to arrive from Afghanistan by the hundreds, but I’ll leave that discussion for another day.

Meanwhile the only news coming out of the mainstream media about refugees in America are sob stories about how they are struggling, out of work, fearful of being evicted, and trying to cope with COVID (like all of America!).

Some are working in essential services like meatpacking (Yogurt making?), others like those in the hospitality industry are out of work in large numbers.

Here is one such story from Twin Falls, Idaho where controversy over refugee resettlement has been muted after years of public protests about how the program was changing Idaho.

(I have a huge archive on Idaho, see it here.)

‘It’s like we’re living a half life’ — For refugees, COVID-19 impacts depend on where they live

The star of this story, a refugee from the DR Congo, says he is more worried about his brother in a refugee camp in Africa.

However, so far, the Chinese Virus has made no significant impact on refugee camps (although as I have reported it isn’t for the media’s lack of interest, they expect catastrophe momentarily).

The article mostly discusses how challenging it is for refugees to live here in America these days (especially as many can’t speak English) and how the refugee agencies are short of funding and also cannot help refugees in person. (Why not? Where are their masks?)

They really aren’t short of funding as I pointed out here.  The nine major contractors that send money down to subcontractors are getting nearly as much as they did during the Obama years (some are getting more!) when thousands upon thousands arrived every month!

The motherships must be holding on to the cash in order to pay salaries of their top execs.  Besides, letting the low level staffers go makes for a better media story anyway!

Here is one little snip from this publication (these Idaho papers are prickly, they once sent me a letter telling me I couldn’t snip their stories).

The federal government pushed the date resettlements would restart from May 1 to May 15, but resettlement centers anticipate it will be pushed again.

“For that to happen involves the coordination of many government agencies to allow a refugee to travel,” Rwasama said.

“Many of those agencies are working with limited staff. I don’t see how we can receive refugees during this time.”

Now that refugee resettlement is halted in the wake of COVID-19, federal funding coming to resettlement programs will be drastically reduced…

You can read it all here.

Then there is an AP story  circulating mostly about Arizona Afghans you can read yourself entitled:

New refugees struggle to find footing in US during pandemic

Coping with reduced budgets! Not!

The College of Southern Idaho Refugee Program is a subcontractor of the US Committee for Refugees and Immigrants which is almost 100% funded by taxpayers.  Its chief executive officer makes at least a quarter of a million a year in salary (last we checked) that YOU are paying.

Here is how they are doing financially from USA Spending….

The $90 million in the left hand corner is the amount of federal funding they have received in the last 12 months! 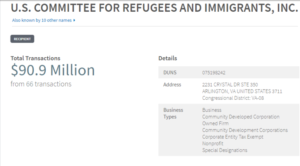 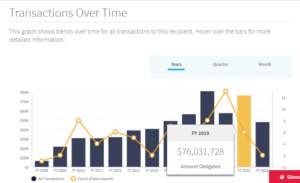 The International Rescue Committee, also mentioned in the Twin Falls sob story, has seen little change in its financial position from the Obama years.  Its CEO, David Miliband, is pulling down a salary approaching a million dollars annually.

How about if they pony-up some of their federal funding to directly feed and house refugees they have distributed around America for years.

Why should taxpayers first pay for the resettlement and now pay for refugee care during the virus crisis?

$215 Million in the last twelve months! 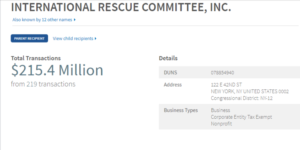 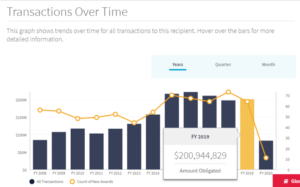 This is no time to resume admitting more poverty to America!

2 thoughts on “Will Refugee Resettlement Resume Tomorrow as Was Expected? News from Idaho”