One of the first things a “welcoming” community in America becomes aware of is the cost of refugee health care at a county health department.

We first became aware of how quickly “pockets of resistance” grow locally when a health department is overloaded with refugee vaccination needs and medical treatment costs for such diseases as TB and HIV/AIDS.   Here is one of our earliest posts on the problem in Ft. Wayne, Indiana (2007!).

Now we see that the US State Department and the CDC are going to try to get a greater number of refugees vaccinated abroad before they enter the US.  It sounds like a good move for medical reasons.  But, it also provides a fig leaf by shifting the cost from one group of taxpayers to the other.  While relieving the burden on local and state taxpayers, the costs will be borne by the federal taxpayers, so what is the difference!

Wyoming please note that if they are successful in vaccinating 56% abroad (we resettle on average 70,000 a year), that still leaves 30,800 or so refugees whose vaccination needs will be paid for by state and county taxpayers along with many other of their medical needs!  Wyoming Governor Matt Mead thinks the refugee program is free to Wyoming and that the federal government has a money tree! 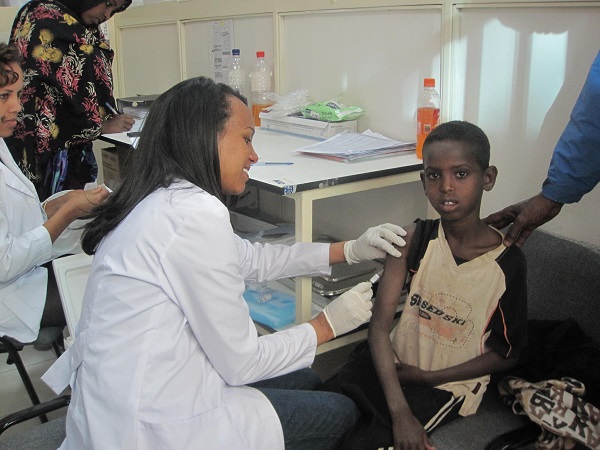 The refugees have agreed to participate in a vaccination project that will introduce multiple vaccines overseas, depending on age, before they arrive to the US. The project is a partnership between CDC’s Division of Global Migration and the US Department of State’s Bureau of Population, Refugees, and Migration (PRM). CDC and PRM are co-funding this project for approved refugee applicants in the US Refugee Admissions Program (USRAP).The goal of the project is to provide cost-effective public health interventions, improve refugee health, and limit the number of vaccinations refugees will need after they arrive in the US. In addition to Kenya, the vaccination project is being implemented by IOM with USRAP in Ethiopia, Thailand, Malaysia, and Nepal.

This project has been implemented in five countries and will provide vaccinations overseas to 56 percent of US-bound refugees each year, saving state and local health departments from the cost and time to provide those vaccines after the refugees reach their new homes in the US.

And thereby eliminating an important driver of community resistance to refugee placement.

This is your typical Leftist ploy—start spreading a number around (like 20,000) and then 5,000 will sound like a reasonable compromise to the gullible!

From the Toronto Sun:

OTTAWA — The New Democrats and Liberals are pushing the federal government to swing open the doors and let in tens of thousands of Syrian refugees to Canada.

The Commons foreign affairs committee released a new report Friday with 14 recommendations for Canada’s response to the ongoing Syria crisis, including a call the Conservative government to “examine” its commitment to take in 1,300 Syrian refugees by the end of the year.

However, the two main opposition parties say Canada should go a lot further.

“The Government of Canada should significantly increase its commitment to Syrian refugee resettlement beyond the current pledge of up to 1,300, accelerate processing of Syrian refugees coming to Canada, and expedite family reunification for Syrian refugees who have relatives in Canada,” said the NDP in its comments.

The Liberals went even further in their supplementary report, quoting one witness who said “20,000 is very reasonable” as the total number of Syrian refugees that Canada could accept.

A report in March, here, says Canada had only taken 10 (ten) Syrians at that point.  Like the US, something is holding up the flow—-is it because of security concerns?  Most of the “refugees” are Muslims.

Interesting!  Is the NDP Party trying to divert attention away from its own problems, here.  They must be following the Obama play book—when scandals emerge, change the subject!

Addendum:  This is our 132nd post in our Canada category, here.

This is just one of those warm and fuzzy articles we find ourselves needing to ‘balance.’   It is all about how Syracuse, NY has become a primary resettlement site.  In fact, it is officially a “preferred resettlement site” according to the feds.

Puff pieces like this usually run when there is trouble afoot.  News outlets work with the resettlement agency to get ‘news’ like this out—it is meant to make any complaining citizens feel like they are in the minority and force them to shut up.  In other words, if you aren’t “welcoming” you are mean-spirited and surely a racist boob!

But when a refugee is finally cleared, the highest number end up in the United States, and Syracuse has emerged as a prime city for resettlement.

“We really are a welcoming city and I think most of the communities that have been resettled here have been well integrated into the Syracuse community family,” said Malina. [Helen Malina head of the local contractor—ed]

Out of the approximately 70,000 refugees that come to the United States every year, Central New York receives about 1,200 of them. About half of those are helped by the InterFaith Works Center for New Americans. The center helps refugees find homes and jobs, learn English and adjust to American society. However, the transition can be a difficult one….

Here is one story about the generosity of the taxpayers of New York and this Interfaith gang.  A new Iraqi refugee came with hypertension.  He had emergency heart surgery and spent the next six weeks comatose and in intensive care while others cared for his wife and kids.  Imagine what that must have cost the generous citizens of Syracuse and New York state!

InterFaith Works of Central New York is a subcontractor of Church World Service (one of nine contractors which then subcontract to hundreds of other smaller contractors making it very difficult to follow the taxpayer money trail).

We mentioned Church World Service just yesterday as one of their head honchos is running the lobbying arm of the resettlement industry—Refugee Council USA.

RRW owes a lot to Church World Service because it was they and their subcontractor—Virginia Council of Churches—that first introduced us to the program when they tried and failed to get a foot-hold and establish a  resettlement office in our rural Maryland County.  There would never have been an RRW without their ham-handed Hagerstown adventure.

Check out our archive on Syracuse which recently made the news because a Catholic Church was turned into mosque and it became a major controversy there.  Looking back I see refugees demonstrated against “racism” in Syracuse a few years ago.  No mention of any of that in this warm and fuzzy piece.