There is nothing earth-shattering in this article from MPR News, but it’s just further evidence of the role the meatpacking industry is playing in changing towns in America’s heartland with its avaricious desire for cheap labor—refugee labor!  (Remember Senator Sessions called the meatpackers out here last year as a driving force behind amnesty).

We have been following this topic for going on seven years first brought to our attention by the turmoil created by Somali workers demanding workplace accommodation for their ‘religious’ requirements.  We have an entire category entitled, Greeley/Swift/Somali controversy, where we archived posts on the topic.

But, you know what is really funny (sort of) is that the meatpackers apparently got sick of the Somali workers in some places and must have asked the US State Department (and their contractors***) for some more docile workers like these Burmese Karen Christians or the mostly Hindu Bhutanese refugees we have been bringing in ever since Bush “welcomed” them in 2007.

The refugees are basically cheap, legal, captive laborers which you subsidize through the myriad social services they receive (see our fact sheet for the list of welfare programs open to refugees).

St. Paul is home to the largest Karen population in the country. But in recent years, Austin has attracted hundreds of the Karen and Karenni people.

Austin, a meatpacking town that has seen big demographic changes in the last few decades, started attracting workers from Mexico and Latin America in the early 1990s, followed by a wave of African immigrants. [The meatpackers used illegal labor from south of the border until the feds clamped down and then they discovered refugee labor thanks to Bill Clinton—ed]

The city’s growing Karen population is the first influx of minorities that has not been Latino or African, and the change has come fast.

According to the city’s Welcome Center, the number of Karen and Karenni residents in Austin nearly tripled to 1,224 this year, up from 463 in 2012. Driven out of their long-adopted home of Myanmar to camps in Thailand, the members of the two groups are flowing to the United States as refugees.

That means they can work legally, and some have replaced other immigrants at workplaces like Austin’s Hormel and Quality Pork processing plants, Austin schools superintendent David Krenz said.

Of course this massive plant in Austin would not have had Somali workers in the first place!  (Pork of course!).

The Minnesota resettlement agencies affiliated with the federal government are listed here.  They are subcontractors of the big Volags below.  BTW, they call themselves Voluntary Agencies (Volags), but that is an obvious misnomer as most are nearly completely funded by tax dollars.

***The federal migrant resettlement contractors which we have followed for years (Grant recipient big dogs (devouring federal cash) Baptist Child and Family Services and Southwest Key Programs  are new on the scene in recent years and mostly due to UACs.):

I’ve been betting on Sweden, but some of my compatriots say it will be the UK.  Other guesses?

The news from Sweden’s election yesterday would indicate that Sweden has just stepped-up the pace in the all important race over the cliff for western civilization.  Or has it?

The Wall Street Journal reports that the Swedish Left wing has pushed out the Center right with Leftists angry that their welfare state is eroding.  They worry that health care isn’t as good nor is education as it used to be, but this article laughably makes no DIRECT link to the enormous influx of Muslim third-worlders Sweden has “welcomed” and the decline in the ability of the social safety net to hold them all.

I suppose the big question for the Left is:  do they want the welfare reserved for Swedes or are they sharing their goodies with the world (until they run out)?

Eventually the WSJ mentions the Syrians and the success of the “anti-immigration” party, Sweden Democrats, in the election.

The strong showing of the anti-immigration Sweden Democrats—whose share of votes climbed to 13% from 5.7% in the 2010 election—surprised pollsters. Their opposition strength in parliament also could force Mr. Lofven to recruit a center-right party to his coalition to ensure he can drive through policies.

Fifteen paragraphs in we finally hear about the Syrians (on top of all the other Muslims from places like Iraq and Somalia already flooding into Sweden).  We told you about Sweden swinging wide the door to Syrians just when Obama visited last year at this time, here.

Last September, Sweden became the only European Union country to offer permanent residence to Syrians fleeing their devastated homeland and ahead of the election Mr. Reinfeldt asked Swedes to “open their hearts” to those seeking refuge.

He also acknowledged that immigration will strain the state budget in the short term, something the Sweden Democrats seized on for their campaign. They became the country’s third biggest party in Sunday’s voting.  [LOL! short term?  Where are they going to get the resources long term?—ed]

“Now it will be hard for the other parties to ignore us,” Party Leader Jimmie Akesson said.

For those of you watching Europe’s slide with bets on the UK going first, here are some stats from the Daily Mail yesterday (hat tip: ‘pungentpeppers’) that argue for your case.

The article is entitled: The changing face of Britain: A child in Birmingham is now more likely to be a Muslim than Christian.

Be sure to look at the adult to children ratio in each city. 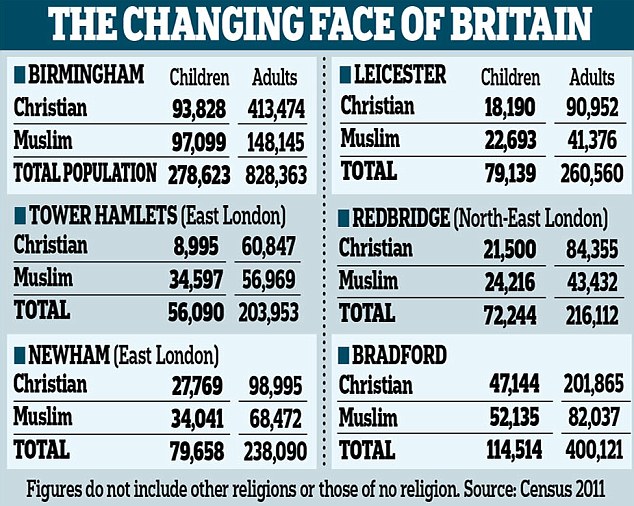 Our extensive archive on Sweden is here.  See also our ‘invasion of Europe’ series by clicking here.